Update Required To play the media you will need to either update your browser to a recent version or update your Flash plugin.
By Hai Do
11 January, 2019


The Saudi woman who fled to Thailand has been permitted asylum in Canada.

"That is something that we are pleased to do because Canada is a country that understands how important it is to stand up for human rights and to stand up for woman's rights around the world and I can confirm that we have accepted the U.N.'s request," Trudeau said. 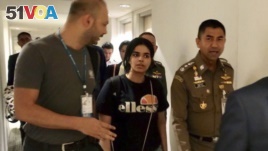 Qunun arrived at Bangkok's airport last Saturday. She accused her family of abuse and refused to meet her father and brother who sought to take her back to Saudi Arabia.

After a 48-hour wait, she was permitted to enter Thailand and has been processed as a refugee by the United Nations Refugee Agency (UNHCR).

Her case has drawn attention to Saudi Arabia's restrictive social rules. One requires that women get permission from a male "guardian" to travel. Rights groups say the rule treats women and girls as prisoners of abusive families.

Qunun's situation comes as Saudi Arabia is facing international pressures over the killing of reporter Jamal Khashoggi in Turkey and Saudi involvement in the conflict in Yemen.

Australia had said on Wednesday that it was considering taking in Qunun.

Hai Do adapted this story based on Reuters and Associated Press news reports. Caty Weaver was the editor.

grant - v. to do, give, or allow (something asked for or hoped for)