Saving Small Fish as Big US River Dries Up

Update Required To play the media you will need to either update your browser to a recent version or update your Flash plugin.
By Hai Do
05 August 2022


On a recent afternoon, vehicles moved up and down the dry riverbed of the Rio Grande River, near Albuquerque, New Mexico.

The drivers had a purpose. They were biologists hoping to save as many endangered fish as they could before the sun dried out shrinking puddles of water.

For the first time in 40 years, the river that forms the border of Texas and Mexico went dry in Albuquerque last month. And the endangered Rio Grande silvery minnow is disappearing along with the water. 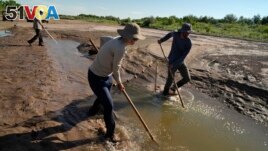 Summer storms have brought river waters back. But, experts warn that drying this far north is a sign of an increasingly limited water supply. They say that there might not be enough water to save the minnow and to provide water to nearby farms and communities.

The minnow, a tiny native fish, lives in a small area of the 3000-kilometer-long river. It has survived 100 years of habitat loss as the water was moved, redirected, and taken from Colorado to New Mexico, Texas, and northern Mexico.

In 1994, the U.S. government listed the Rio Grande silvery minnow as endangered. Scientists, local officials, and environmental groups have worked to keep the fish alive — as required by the Endangered Species Act. But their efforts have not been enough.

Years of drought, high temperatures, and an unpredictable rain are destroying what remains of its habitat. Officials can do little.

U.S. Fish and Wildlife Service biologist Thomas Archdeacon leads a program to rescue the minnow. He said, "When you have flow one day and no flow the next for miles, [the fish] don't know how to get out of that."

The minnow's survival rate after being rescued is poor. Only five percent survive the experience. Still, leaving them in the puddles is a certain death sentence, Archdeacon said.

Over the years, the government has bred and released large numbers of silvery minnows. But the fish need more water in the river to survive, officials say.

Historically, one way to raise water levels has been to release it from man-made lakes. But this year, New Mexico has been unable to store extra water. The state must send water to Texas as part of an agreement. And the rainstorms in June were not enough to refill the river.

To keep more water in the Rio Grande, the state is offering to pay farmers to leave fields unplanted. But few have agreed. In one area, officials said only five percent was left unplanted this year.

"We need more people to do it," said Jason Casuga, chief engineer for the Middle Rio Grande Conservancy District. But the program is just in its second year, and farmers want to grow crops, Casuga said.

For the past four years, Ron Moya has farmed about 20 hectares of land near Albuquerque. A retired engineer, Moya said he now works on the same land that generations of his family had farmed before him.

Last year, Moya left four hectares unplanted in exchange for several thousand dollars. But he said he would not do it this year although he was offered more money. That is because he wanted the moisture to keep the soil on his farm alive.

Mike Hamman is New Mexico's state water engineer. He said the state has already taken a lot of measures to save water. "So now it gets a little harder," he said.

Brittany Peterson and Suman Naishadham reported this story for the Associated Press. Hai Do adapted it for VOA Learning English.

puddle –n. a small amount of water or wet soil on the ground

breed –v. (irr.) to raise animals or plants to produce more of them with a desire to increase their numbers