Update Required To play the media you will need to either update your browser to a recent version or update your Flash plugin.
By Bryan Lynn
26 December 2021


The year 2021 saw some important developments in the exploration of Mars as well as a rise in American-based space tourism.

In February, the American space agency NASA announced that its Mars explorer, Perseverance, landed successfully on the Red Planet. Perseverance is on a mission to collect Martian soil and rocks as part of a search for signs of ancient life.

Perseverance landed in an area of Mars called Jezero Crater. Scientists believe the area contains a large ancient lakebed. NASA considers the area a promising place to find possible signs of microbial life. Scientists believe if life ever existed on Mars, it would have been present 3 to 4 billion years ago, when water flowed on the planet. Perseverance is NASA's fifth rover to explore Mars. 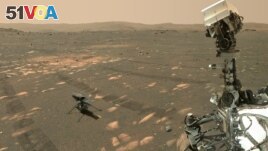 NASA's Perseverance Mars rover took a 'selfie' with the Ingenuity helicopter, seen here about 13 feet (3.9 meters) from the rover. This image was taken by the WASTON camera on the rover's robotic arm on April 6, 2021, the 46th Martian day, or sol, of the

Perseverance carried to Mars a small experimental helicopter named Ingenuity. In April, NASA announced Ingenuity had successfully completed a takeoff and landing on the planet. It said the flight was historic; it marked the first time any aircraft had performed a powered, controlled flight on another planet.

Ingenuity was meant to demonstrate such flights are possible. NASA says similar helicopters and other aircraft could be used in the future to assist astronauts in search and collection operations.

Only a few test flights were planned, but the Ingenuity team said the first ones were so successful that they decided to extend the number of experimental flights. So far, Ingenuity has completed at least 17 flights, with flights progressing in length and distance.

This year, both China and the United Arab Emirates (UAE) sent their first spacecraft to Mars.

In May, China announced that its Tianwen-1 spacecraft had successfully landed on Mars after a seven-month trip. The vehicle landed at Utopia Planitia, a large flat area in the northern half of the planet. The six-wheeled explorer is studying the planet's surface soil and atmosphere in search for signs of ancient life.

The UAE's Hope Probe spacecraft was sent to an extremely high orbit to study Mars. The Emirates Mars Mission aims to study atmospheric and weather conditions around Mars. Among other things, it seeks to help scientists understand how hydrogen and oxygen react in the planet's upper atmosphere.

In February, scientists announced they had created a new map that aims to identify the best sources of water on Mars. Water is considered a critical resource to support future exploration activities on Mars. The map identifies two specific areas on Mars where subsurface ice could likely be found.

In July, British billionaire Richard Branson launched into space on a rocket plane built by Virgin Galactic, the space tourism company he created. Branson joined two pilots and three other "mission specialists" on the flight. Virgin Galactic aims to fly private citizens to the edge of space to experience a few minutes of weightlessness and observe Earth.

A little over a week later, American billionaire Jeff Bezos flew to the edge of space on a rocket built by his company, Blue Origin. Three other people took the quick trip with him: Bezo's brother, a Dutch teenager and an 82-year-old pilot.

The flights by Branson and Bezos officially launched a new industry that promises any citizen the chance to visit space. Such trips will be costly, however. Virgin Galactic's price for a single flight is $250,000. Blue Origin has not publicly announced its price. Both businesses have established operating bases, called "spaceports," in rural areas of the U.S.

And earlier this month, Japanese billionaire Yusaku Maezawa arrived for a 12-day stay at the International Space Station (ISS). The businessman arrived along with an assistant aboard a Russian Soyuz spacecraft. The price of that trip has not been made public, but some reports say it cost up to $50 million.