Update Required To play the media you will need to either update your browser to a recent version or update your Flash plugin.
By Alice Bryant
07 April 2020


The new coronavirus crisis has launched a very large, unplanned experiment with online learning in the United States. And it has created problems for schoolchildren with limited internet or no internet service.

School officials and governments in many areas are trying to give millions of U.S. students without home internet a chance at keeping up with their studies.

Many students in rural South Carolina have been having trouble getting online since schools in the U.S. state closed. But recently, six buses equipped with WiFi internet came to help. The state has sent hundreds of buses to rural areas since schools closed because of the coronavirus crisis.

The buses broadcast high-speed internet in an area the size of a small parking lot. Parents can drive up in their cars and their children can use the internet inside the vehicles. One of the buses is outside of the apartment building of Lacheyle Moore. She had been limiting her mobile phone usage so that her daughter could use the data on her mobile plan to do schoolwork. Mobile serviced providers charge extra money if people use more data than their plan permits.

"I have to put extra data on my phone to make sure her work gets done," said Moore. Moore works as a cashier. She said she changed her work hours to help teach her two children. 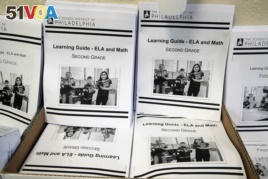 In this Wednesday, March 25, 2019, photo are learning guides to be distributed to students at John H. Webster Elementary School in Philadelphia. Only about half of the district's high school students have a laptop or tablet and home internet service. (AP)

It is estimated that three million students do not have internet service at home because of the high cost and gaps in availability. Some studies suggest that these students are more likely to be students of color, from low-income families or have parents with lower education levels.

The nation's largest school districts are spending millions of dollars to provide devices and internet connections for students. These include the cities of Los Angeles and New York.

Maura McInerney is the legal director of the Education Law Center, which supports policies to help low-income students.

She said the school closings are causing these children to fall behind further. Lower-income school districts are forced to find other ways to meet the educational needs of their students.

"Lots of mothers and fathers are really not equipped to be home school parents," said J.R. Green, the top school official in his district.

The Philadelphia School District banned online schooling during the early days of the school closings because only about half the district's high school students have a laptop or tablet and home internet service.

Now, it appears that schools are likely to be closed for a longer period of time. Philadelphia plans to buy 50,000 Chromebook tablets and begin online schooling by the middle of April.

Based in Philadelphia, the company Comcast has promised to increase speeds of its $10-a-month plan for low-income school families. It also is offering two months of free service.

"We have the $10 internet (plan). It's not for doing lessons, because it's really slow," said parent Cecilia Thompson who is 54 years old. She said she would need a higher internet speed to use the Google classroom, which is too costly for her. Thompson cannot work because of her health. She lives with her 21-year-old son, a student with autism, who goes to Martin Luther King High School.

Mike Looney is the superintendent of Fulton County schools in Georgia. He said parents should take offers for reduced-cost internet from service providers. But he also wants the Federal Communications Commission to put money that was once used for lowering costs of school internet toward supplying students with devices and internet at home. It is an idea that has support from some U.S. senators.

In central Ohio, Hilliard City Schools provided students with Apple iPads they can use to download, complete and then submit homework. The iPads permit them to do much of their work without internet, says district Superintendent John Marschhausen. But they will need to connect in order to submit completed work and receive their new lessons.

The district's nearly 25 schools are extending WiFi into their parking lots so families can complete downloads from their vehicles. Marschhausen said he thinks most students will not find the changes difficult. But he worries about the major change for younger students who usually spend less than half an hour on their devices in the classroom.

"We're going to have to do a lot of adapting...and a lot of learning along with our families if this is truly something that will continue into the summer," he said.

parking lot –n. a large paved area where cars or other vehicles are kept

cashier –n. a person who takes money and gives change at a store

district –n. an area of a country, city or town for a purpose related to government

hot spot –n. a place small area where computers can get on the internet

census –n. an official count of the number of people in a country or smaller area

tablet – n. a small computer the size of a paper notebook

autism –n. a disorder that causes problems in communication and dealing with people

adapting –v. to change behavior in order to make it easier to live in a place or situation