Update Required To play the media you will need to either update your browser to a recent version or update your Flash plugin.
By Dan Novak
13 September 2022


Some American children struggled to keep up with schoolwork in the first half of the COVID-19 pandemic. As a result, many states saw large increases in the number of students who had to repeat grades.

Traditionally, experts say that repeating a grade can hurt a child's social life and academic future. But many parents have asked for their children to repeat grades to help them recover from the difficulties of online learning, quarantines and school worker shortages.

The Associated Press examined data from 26 states plus the District of Columbia on the most recent academic year. It found that 22 of the states, plus D.C., saw an increase in the number of students who were retained, or held back a year. Three of those states — South Carolina, West Virginia and Delaware — saw the number of retained students more than double. 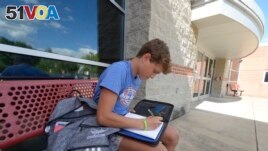 Pennsylvania passed a law during the pandemic permitting parents to let their children redo classes. The following year, the number of retained students in the state increased by about 20,000.

Kristi Price is the mother of a student in Pennsylvania who repeated a grade. She said it was a great decision for him.

"At first I didn't really want to do it," said her son Braylon, now 13. "But then later in the year I thought it would probably be better for me if I did."

While the family's two daughters were able to keep up with school even with limited classroom time, Braylon struggled. When he went back to in-person school for the first full academic year of the pandemic, he did not perform well. And that winter, Braylon suffered an injury that forced him to return to remote learning.

On his repeat of sixth grade, Braylon had an individualized education program that helped him be more focused. Having more one-on-one attention from teachers helped too. Socially, he said the change was easy. Most of his friends had been in lower grades or attended different schools already.

Education research, however, has been critical of making students repeat grades. Arthur Reynolds is a professor at the University of Minnesota. He said students who are retained are twice as likely to drop out of school.

Kids see it as a punishment, Reynolds said. "It reduces their academic motivation, and it doesn't increase their instructional advancement."

But supporters of retention say none of the research was done during a pandemic, when many children attended online classes or did not attend at all.

In most places, parents can ask for children to be held back. But the final decision is made by school leaders, who make decisions based on factors like academic progress. California and New Jersey also passed laws that made it easier for parents to demand their children repeat a grade. But that choice was only available last year.

In Pennsylvania's Fox Chapel Area School District, two students were retained at the request of educators. Eight other families decided their students would repeat a grade. Another six discussed the new legislation with the school but decided against holding their students back.

"As a school district, we take retention very seriously," said Mary Catherine Reljac, who is the head of the district. She said the district involves parents, a team of educators, school counselors and school leaders to help decide what is best for each child.

Price says Braylon's retention helped him receive an individualized education program. The special education plan gave him more support as he attended sixth grade again. Braylon said he felt like the extra support was very important. He said he likes having one-on-one help from teachers sometimes.

"I think because of the pandemic, we, as parents, were able to see how much he was struggling," Price said. "And we were able to recognize...that he needed more help in order to be successful on his own."

quarantine — n. the situation of being kept away from others to prevent a disease from spreading

motivate — v. to give a reason for doing something