Update Required To play the media you will need to either update your browser to a recent version or update your Flash plugin.
By Dan Novak
15 November 2022


Growing numbers of schools in the United States are limiting how much students can use their mobile phones. Educators say phones are distracting and keep children from learning.

But some parents disagree and are pushing back against the policy.

Bans on the devices were increasing before the COVID-19 pandemic. Since schools reopened, struggles with student behavior and mental health have given some schools even more reason to restrict use. 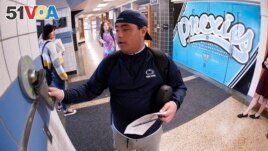 Anthony Bruno, a student at the Washington Junior High School, uses the unlocking mechanism as he leaves classes for the day to open the bag that his cell phone was sealed in during the school day, Thursday, Oct. 27, 2022. (AP Photo/Keith Srakocic)

During the time of online learning, parents had constant access to their children. Some have not wanted to give that access up. Others say they fear losing contact with their children if there were a school shooting.

With more debate on how subjects like race are taught in schools, some parents also view phone restrictions as a way of keeping them out of their kids' education.

Shannon Moser has students in eighth and ninth grades in Rochester, New York. She said she felt parents were being pushed away when the local school system locked away student phones. She noted that many parents on either side of the political divide feel the same way.

"Everything is just so politicized, so divisive. And I think parents just have a general fear of what's happening with their kids during the day," Moser told The Associated Press. There is a form of accountability, she said, when students are able to record what goes on around them.

The National Center for Education Statistics found that about 65 percent of public schools banned mobile phones in 2015. By the 2019-2020 school year, restrictions were in place at 76 percent of schools. And the states of California and Tennessee recently passed laws permitting schools to ban phones.

Now, educators see a need to keep students from being distracted. During the pandemic, many students experienced learning loss.

Liz Keren-Kolb is a professor of education technologies at the University of Michigan. She said school officials may feel like they could restrict mobile devices due to parents' concern about high amounts of screen time during the pandemic. But she said there is a wide range of parental opinions on the subject.

"You still have the parents that want to have that direct line of communication," she said. "But I do think that there's more of an empathy and an understanding toward their child being able to put away their devices so they can really focus on the learning in the classroom."

In western Pennsylvania, the Washington School District started a ban on mobile phones this year as educators found them to be a distraction.

Students were on their phones in the hallways and at lunch tables. Some would call home or answer calls in the middle of a class, high school teacher Treg Campbell said.

In some cases, pushback from parents has led to changes in policy.

At the Brush School District in Colorado, mobile phones were banned after teachers had concerns over online bullying. When parents pushed back, the school system held a community meeting, with most arguing against the ban. Parents said they wanted their children to have access to their phones.

The policy was changed to permit phones on school grounds. But they must be turned off and put away. The school also said it would let some students use their phones for special reasons.

"There's not an intention to say cell phones are evil," Wilson said. Instead, it is "‘How do we manage this in a way that makes sense for everybody?'"

Kolb said there is no perfect answer for phones in schools.

"It really comes down to making sure that we're educating students and parents about healthy habits with their digital devices," she said.

politicize — v. to relate to politics in a way that makes people less likely to agree

accountable — adj. required to be responsible for something

focus — v. to direct your attention or effort at something specific

intention — v. the thing that you plan to do or achieve