US Schools Plan for Remote Learning into the Fall

Update Required To play the media you will need to either update your browser to a recent version or update your Flash plugin.
By Jonathan Evans
16 February 2021


School leaders around the United States are planning for the possibility of more distance learning in the next school year.

William "Chip" Sudderth III is a spokesperson for Durham, North Carolina schools. School buildings there have been closed since last March. Sudderth said, "We have no illusions that COVID will be eradicated by the time the start of the school year comes up."

U.S. President Joe Biden has said that reopening schools is a top goal for the country. School administrators say a reopening plan requires careful consideration. They note complications such as the spread of new versions of the COVID-19 virus and vaccination campaigns for teachers.

Many parents are demanding that schools fully reopen. Others say they will not feel safe sending children back until vaccines are available to even young students.

By then, school systems will be preparing for the next school year.

He said at least part of next year will be affected by the coronavirus because "children won't have access to the vaccine, or at least many won't."

Educators there have been using a complex mix of in-person and online teaching. They often are teaching two groups of students at the same time. Woods said changes in the new year might ease that situation by splitting staffing or changing teacher work times. He added the district may change to all-online learning for students who have moved on permanently from traditional school.

A school system statement explained it this way: "One thing that we have learned during the pandemic is that teaching and learning is now different, and it will not fully be what we used to think was ‘normal' ever again."

The change to distance learning last March kept the public school system operational in America. But concern continues to grow about the effects of distance learning on racial fairness, performance, attendance and the overall well-being of U.S. school children. 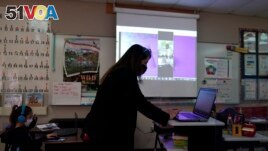 Wylona Rogers teaches students attending a class in-person as well as students attending virtually at Driggers Elementary School, Monday, Feb. 8, 2021, in San Antonio. After seeing two academic years thrown off course by the pandemic, school leaders around the country are planning for the possibility of more distance learning next fall at the start of yet another school year. (AP Photo/Eric Gay)

In Durham, North Carolina, officials announced last month that public schools there would continue the distance learning operation through the end of the current school year.

Biden has ordered the U.S. Department of Education to provide "evidence-based guidance" and advice to schools to safely operate in-person learning.

Eva Moskowitz is the head of Success Academy Charter Schools. The 47 schools have 20,000 students in New York City. She said, "I'm hoping that we don't have to do hybrid, but I don't want to be in a position where we haven't thought it all through."

"I honestly don't know what the chances are" of continuing distance learning into the next school year, she said.

New York City Mayor Bill de Blasio has promised that schools in the nation's largest school district are "going to be back full-strength in September."

"Everyone wants to be back," he added.

Michael Mulgrew is the president of the United Federation of Teachers which works to protect the rights of teachers in New York City public schools. He says it is too soon to reopen schools. Schools currently are providing some in-person classes to elementary and pre-K students who want them. But middle and high schools are online-only after reopening for a time in the fall.

Mulgrew said it will take more than teacher vaccines to open schools fully and safely.

He noted that scientists are not yet clear on whether vaccinated people might still be able to spread the virus, even if they are not sickened themselves. And Mulgrew wonders how comfortable families will feel about having unvaccinated students begin the new year unvaccinated.

"This is where it gets tough. So how do you say you're opening in September when we need to get these questions answered?" he asked.

Carolyn Thompson reported on this story for the Associated Press. Jonathan Evans adapted this story for Learning English. Caty Weaver was the editor.

complication – n. something that makes something harder to understand, explain, or deal with

eradicate – v. to remove something completely; to eliminate or destroy something harmful

hybrid – adj. something that is formed by combining two or more things

tough – adj. very difficult to do or deal with