Schools to Reopen in Chicago, Others Move Online

Update Required To play the media you will need to either update your browser to a recent version or update your Flash plugin.
By Dan Novak
11 January 2022


Public school students in Chicago could return to classes Wednesday following an agreement between the city and the teachers' organization.

A dispute over COVID-19 safety measures has kept students in the third-largest school system in the United States out of the classroom for five days.

The agreement, announced late Monday, still requires approval from the city's 25,000 teachers. The deal included expanded COVID-19 testing and rules for when to close schools during outbreaks. And school officials told parents that classes for the 350,000 students would return on Wednesday. 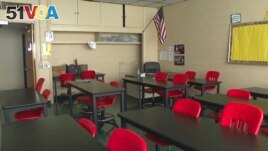 In this image made from video, an empty classroom is shown at David Ellis Academy in Detroit, Monday, Feb. 8, 2021. (AP Photo/Mike Householder File)

Cheri Warner is the mother of 15-year-old twins. She said the sudden loss of in-person learning has greatly impacted her family.

The girls "missed their whole eighth-grade year and it felt like they weren't really prepared for high school," Warner said. Losing communication with friends and teachers makes things worse, she said.

Last week, the Chicago Teachers Union, the organization representing the teachers, voted to move to online instruction. The organization said teachers were worried about safety measures during the latest increase of COVID infections.

However, Chicago school officials, like most other school district officials, have rejected a return to remote learning. They said it worsened racial inequities and reduced attendance in the district of largely Black and Hispanic students. Officials said it affects academic performance and mental health. And they noted that schools could safely remain open with safety measures in place.

Similar issues and concerns across the nation

Across the U.S., school districts have also faced similar concerns and issues.

While most schools remain in-person, some large school districts have returned to online instruction as COVID-19 infections have greatly increased among students, teachers, and school workers.

The large school systems with schools that have returned to remote learning include Newark, New Jersey; Milwaukee, Wisconsin; and Cleveland, Ohio. Smaller school districts close to Detroit, Chicago and Washington, D.C. have also switched to online.

American President Joe Biden is pressing schools across the nation to remain open. With vaccines and regular virus testing, his administration has said there is no reason to keep schools closed.

"Look, we have no reason to think at this point that Omicron is worse for children than previous variants," Biden said last week. "We know that our kids can be safe when in school."

But the reality for some districts is not so simple. Testing supplies have been limited, and many districts have low vaccination rates in their communities.

In Detroit, Michigan, just 44 percent of people 5 and older have received a vaccine shot. And the school system has moved to online learning for at least the first two weeks of 2022.

Nikolai Vitti is the head of the Detroit school system. He wrote to parents that because of low vaccination rates among students and families, a return to the classroom would lead to "extreme levels of positive cases."

Latonya Peterson has children attending Detroit public schools. She is a single parent who works more than 60 hours each week at two jobs. She sometimes had to miss work to help her teenage son during more than a year of online learning.

Faced with the return to online classes, Peterson told The Associated Press, "I hate it."

Her son Joshua Jackson added, "I feel like I learned less." He said it was more difficult for him to pay attention while remote learning.

As infections reach record levels in some areas, some parents agree with the decision to move instruction online.

Rebecca Caldwell is a parent in Charleston, Illinois. She is asking her school district to give families the choice of online learning.

"They say kids do well (if infected), but who's to say my kid is not going to be that one," Caldwell said.

remote — adj. connected to a computer system from another place

previous — adj. existing or happening before the present time