Update Required To play the media you will need to either update your browser to a recent version or update your Flash plugin.
By Bruce Alpert
02 September, 2017


Colleges begin the new school year under pressure to protect free speech -- even when many students strongly disagree with the speakers' messages.

Many of the protests in the last school year tried to block conservative and white nationalist speakers. And some colleges that experienced violent protests have announced new efforts to encourage free speech.

Fifteen leading scholars at three of the nation's top universities -- Harvard University, Yale University and Princeton University -- wrote a letter this week with this advice for new college students: "Think for yourself."

The letter said that means students should honestly consider arguments, even from people with opinions they find objectionable.

Kansas State University recently announced it will work hard to protect free speech. A statement from the school's top officials said free speech is "one of our most cherished rights, protected by the United States Constitution."

At Claremont McKenna College in California and Middlebury College in Vermont, officials promise more speeches by people with different opinions. During the last school year, demonstrators at the schools blocked speeches by conservative speakers.

The two schools punished some protesting students. Claremont McKenna went further than Middlebury by banning five students from campus for up to a year. 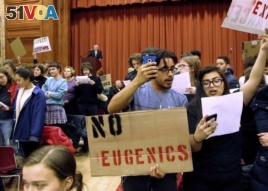 At the University of California Berkeley, new Chancellor Carol Christ called for a return to the school's reputation as the home of the Free Speech Movement.

Free speech must include speeches by people whose opinions "conflict with the values we hold as a community," Christ said. Those values include acceptance of all people and diversity, she said.

"If you choose to protest, do so peacefully," she said in a recent message to Berkeley students and teachers. She said the school will not "tolerate violence."

Just days after Christ asked students and teachers to support free speech, there was another violent protest. It took place in a park near the Berkeley campus during a "free speech" event.

Demonstrators, some with their faces covered in black cloth, attacked at least five people, including the leader of a politically conservative group, the Associated Press reported.

Some of the attackers were from a group called Antifa, short for anti-fascists. Some Antifa members say that violence is acceptable to fight racism. It was not known if any of the Antifa members were Berkeley students.

Protests against the left

Conservatives and white nationalists are not the only groups whose free speech rights are being questioned.

Mark Bray is a lecturer at Dartmouth College and considered an expert on Antifa. On NBC's Meet the Press, he said Antifa supporters believe that Nazis and other Fascists cannot be stopped with free speech alone. Bray said the Nazis in Germany and other fascist leaders in Europe before and during World War II were only stopped by violence.

Dartmouth's President Philip Hanlon said Bray seemed to be saying that violence is acceptable. He said Dartmouth does not accept anything but "civil discourse" in discussing opinions and ideas.

That led 120 Dartmouth teachers to defend Bray. At most colleges, an official whose expertise is reported on by national news reports is praised, the teachers said in a letter.

Evergreen State College in the Western state of Washington is another college that experienced conflict during the last school year.

It began when some students moved to change a yearly event that seeks to make the college community aware of racism. In previous years, African-American students and college employees would leave the college for a day to show the loss that takes place when they are not present.

Last spring, the event was changed with white students and white employees asked to leave for a day. Brett Weinstein, a white biology professor, refused. Weinstein said that he and his wife, another Evergreen teacher, were called racists and threatened by some students.

The school was also closed for several days after a threat of violence from an unidentified caller. The threat came after some conservative groups said liberals controlled the college and threatened those with different opinions.

This year, the college says, it will hold a special program for new freshman. The school calls the program, "Conversing across Significant Differences." The goal is to help students learn how to peacefully deal with different opinions.

But all is not well. Weinstein recently went to court to charge college officials with permitting his rights to be violated.

Senator Chuck Grassley is a Republican from Iowa and chair of the Senate Judiciary Committee. At a recent hearing, he said, "Higher education rests on the free flow of ideas." Grassley added that colleges must do more to "protect free speech."

We want to hear from you. Write to us in the Comments Section and share your views on 51VOA.COM. Are their conflicts where you go to school? How are they resolved? And do you think it's important to at least listen to people with different opinions than your own?

cherish - v. to remember or hold an idea or belief in a deeply felt way

reputation - n. the common opinion that people have about someone or something

diversity - n. the quality or state of having many different forms, types, ideas

fascist - n. a way of organizing a society in which a government ruled by a dictator controls the lives of the people and in which people are not allowed to disagree with the government

converse - v. to have a discussion