Update Required To play the media you will need to either update your browser to a recent version or update your Flash plugin.
By Mario Ritter
23 December, 2018


Here are some of the most popular science stories on the VOA Learning English website in 2018.

A Chinese researcher reported last month that he helped to make the world's first genetically edited babies. His claims were quickly condemned by other scientists who denounced his claims as "irresponsible".

The researcher's employer, Southern University of Science and Technology of China, said it did not know about his activities. China's government ordered a halt to the work soon after news media reported on the experiment.

The researcher, He Jiankui, said that he had edited or changed the genetic material of two human embryos. The embryos developed into two girls, who were born recently. He Jiankui said he had performed the gene editing to help protect the babies from infection with HIV, the virus responsible for the disease AIDS. He said the process had "worked safely" and the two girls were "as healthy as any other babies."

There has been no independent confirmation of He's claims, and he has yet to provide documentation of his research.

China's Ministry of Science and Technology called the experiment "unacceptable."

In 2017, the U.S. National Academies of Sciences, Engineering and Medicine said gene editing should be used for research and only in a laboratory to learn how to change embryos.

The Academies also said the technique is not ready for human pregnancies. And if it is ever permitted, it should be used to treat or prevent serious diseases when no better choices are available.

Gene-editing, however, could soon be approved for agricultural products. In fact, the technology used to edit genes has become widely available.

The first foods from plants or animals that have had their genetic material, or DNA, "edited" are expected to appear in stores as early as next year. 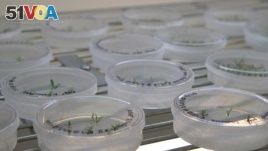 FILE - This Sept. 27, 2018 photo shows petri dishes with citrus seedlings that are used for gene editing research at the University of Florida in Lake Alfred, Florida.

CRISPR and TALENs are two of the gene-editing systems that scientists are using. Scientists hope these tools will enable them to make very small, exact changes to plant or animal DNA. The tools operate like scissors, cutting off molecules from DNA structures.

The researchers are trying to create foods like soybeans that are healthier to eat, citrus fruit that resists disease and cows that do not have horns.

The U.S. National Academy of Sciences says that gene editing is needed to feed the world's growing population. However, governments are not yet sure how to oversee the use of this technology. It also is unclear whether people will be willing to buy gene-edited foods.

The dream of visiting space for pleasure took another step closer to reality this year.

The space travel company Virgin Galactic announced it had successfully sent a rocket ship into space for the first time in December.

The SpaceShipTwo VSS Unity climbed to 82 kilometers above California's Mojave Desert on December 14. Virgin Galactic noted that the U.S. Air Force and other government agencies have long used 80 kilometers as their measuring point for space.

The company hopes that people will pay $250,000 for a 90-minute flight. Its chief, Richard Branson, is among the more than 600 people who have expressed a willingness to go.

The company hopes to launch its first passengers into space by March of 2019.

A competing company, SpaceX, wants to take space tourism to an even higher level. In September, SpaceX announced who would be its first private passenger to the moon.

Yasaku Maezawa is the chief executive of Japanese online clothing seller Zozo. He wants to take a trip around the moon in 2023.

SpaceX chief executive Elon Musk said the moon trip will use the company's Big Falcon Rocket, or BFR. He predicted that the rocket will cost about $5 billion to develop. Musk did not say how much Maezawa would pay towards his flight.

2018 was marked by continuing concerns about rising temperatures and climate change.

Hurricanes striking the eastern United States and wildfires in California led to urgent calls for new measures. Reports from the U.S. government and United Nations also predicted increased weather-related disasters. These include drier than normal weather conditions, rising sea levels, hunger and other problems, if nothing is done. 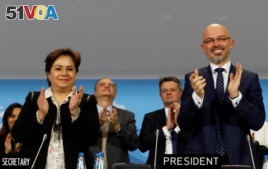 In December, officials of nearly 200 countries met in Poland for talks on how to reduce production of carbon gases linked to rising temperatures.

The U.N. conference did not reach agreements on production targets for such gasses, however.

In October, a U.N. report said that many climate-related problems could be avoided if surface temperatures could be kept from rising by .5 degrees Celsius by the year 2100.

The Intergovernmental Panel on Climate Change, or IPCC, reported that it is possible to limit the earth's warming to 1.5 degrees Celsius by 2100. But to do so would require big changes in the international economy, including a move away from carbon-based fuels like oil and coal.

The United States, Russia, Saudi Arabia and Kuwait opposed calls to include that statement in the IPCC report.

Plastic is a big concern for people living in the Pacific Ocean. There something huge, called the Great Pacific Garbage Patch, is growing.

Experts estimate 1.8 trillion pieces of plastic are floating within a few meters of the ocean's surface.

A group of engineers launched what they hope will solve the problem in September. The group Ocean Cleanup sent a huge barrier designed to capture plastic waste. It uses the sun's energy and is designed to keep sea life safe.

Boyan Slat of the Netherlands leads Ocean Cleanup. He said the goal "is to remove 50 percent of the Great Pacific Garbage Patch in five years."

Products made from plastic take a long time to break up. Many sea animals mistake plastic particles for food. In recent years, whales, sea turtles, birds and other sea life have been found dead with plastic waste in their stomachs.

Environmentalists at the Ocean Conservancy note that 8 million metric tons of plastic enter the ocean every year.

Mario Ritter wrote this report from VOA Learning English. The report was based on stories published on our website earlier this year. George Grow was the editor.

edit – v. to make changes to something, such as a piece of writing, by adding or removing parts of it

executive – n. a person who supervises or directs other people in a company or organization