Update Required To play the media you will need to either update your browser to a recent version or update your Flash plugin.
By Anne Ball
18 June, 2017


Scientists have found new evidence that Homo sapiens, or humans, have been around longer than we thought.

Bones found at a site called Jebel Irhoud in Morocco are 300,000 years old. That is about 100,000 years older than any other known remains of our species. They were discovered far from where the oldest fossils had been found before in Ethiopia. 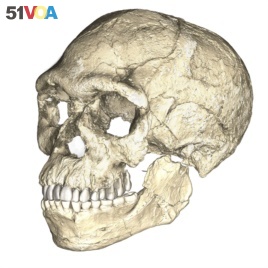 A composite reconstruction of the earliest known Homo sapiens fossils from Jebel Irhoud in Morocco, based on micro computed tomographic scans of multiple original fossils, is shown in this undated handout photo obtained by Reuters, June 7, 2017.

Scientists decided that skulls, limb bones and teeth they found represent at least five individuals. They show people from an early stage of our species' development. They are a mix of modern and more ancient, or simpler, humans.

Jean-Jacques Hublin works at the Max Planck Institute for Evolutionary Anthropology in Leipzig, Germany, and the College of France in Paris. He and others described the new findings in two papers released last week by the journal Nature.

"They are not just like us," said Hublin. But they had "basically the face you could meet on the train in New York."

While their face and teeth might look like today's humans, these fossils show a different shaped brain. Their braincases—the part of the skull that contains the brain—were longer. That means it took time for our brains to evolve to their present form.

Given their modern-looking face and teeth, Hublin said these people may have blended in today if they wore a hat.

Hublin said that along with other evidence, the Moroccan fossils suggest that humans may have reached their modern-day form in more than one place within Africa.

"The message we would like to convey is that our species is much older than we thought," Hublin said. He added it did not come from just one place, "a small 'Garden of Eden' somewhere in East Africa." Instead, Hublin said, it was a process that moved across Africa, and is "more complex" than what was believed before."

The Moroccan fossils were found between 2007 and 2011, in what was a cave setting. They represent three adults, one adolescent and one child about 8 years old. It was thought that they lived a hunter-gatherer lifestyle—meaning they hunted or gathered their food, instead of farming.

They were found alongside bones of animals they hunted—gazelles and zebras. There were also stone tools, possibly used as spearheads for hunting and knives. The tools were made from flint, a kind of stone, from about 40 kilometers away. Researchers also found evidence of much fire use.

Today, Homo sapiens are the only human species. But 300,000 years ago, they would have lived on Earth with several now-extinct relatives in Eurasia. These included Neanderthals in the west and Denisovans in the east, and others in Africa.

Even with the discovery, Hublin believes there is an earlier stage of human ancestor that would have walked on Earth before this group from Morocco.

Anne Ball wrote this story for Learning English with information from Reuters and the Associated Press. Hai Do was the editor. We want to hear from you. Write to us in the Comments Section and visit us on 51VOA.COM.

skull – n. the structure of bones that form the head and face of a person or animal

convey – v. to make (something) known to someone

Garden of Eden – n. in the Bible: the garden where Adam and Eve first lived

spearhead – n. the sharp point on a weapon with a long straight handle

ancestor – n. something in the past from which something else has developed