Scientist Might Have Found Earliest Evidence of Animal Life on Earth

Update Required To play the media you will need to either update your browser to a recent version or update your Flash plugin.
By Alice Bryant
31 July 2021


A Canadian scientist might have found the earliest evidence of animal life on Earth. 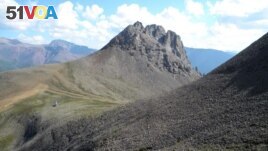 This undated photo provided by Elizabeth Turner shows a field location in Northwest Territories, Canada. Canadian geologist Elizabeth Turner may have found the earliest fossil record of animal life on Earth in the area. (Courtesy of Elizabeth Turner/Laurentian University via AP)

Turner made her discovery in the rocks of Canada's Northwest Territories. She has been doing research there since the 1980s. The area where she works has high mountains and can only be reached by helicopter. But an estimated 890 million years ago, the area was under the sea.

There, Turner said she found the remains of sponges preserved as minerals in rock. The rock contains structures that look like modern sponges that live in the world's oceans.

Joachim Reitner is an expert on sponges at Germany's University of G&#246;ttingen. Reitner was not involved in the research. But he agreed the findings must be a kind of sponge.

Dating of rock levels suggests that the rocks containing the structures are about 890 million years old. That would make them about 350 million years older than the oldest sponge fossils found during earlier studies.

Paco Cardenas is an expert on sponges at Sweden's Uppsala University and was not involved in the research. He said the date of the sponge is the most shocking thing about it. Discovering sponge fossils from close to 900 million years ago will improve our understanding of early animal life, he said.

Many scientists believe the first animal groups included sponges or sponge-like creatures without muscles or nerves. But they had other qualities of simple animals, including cells for different purposes and sperm for reproduction.

However, there is very little scientific agreement about things that happened one billion years ago. So other researchers will continue to examine and debate Turner's findings.

"I think she's got a pretty strong case. I think this is very worthy of publishing. It puts the evidence out there for other people to consider," said David Bottjer. He is a paleobiologist at University of Southern California and was not involved in the research.

Scientists believe life on Earth appeared 3.7 billion years ago. The earliest animals appeared much later but exactly when is still debated.

The oldest undisputed fossil sponges date to around 540 million years ago, a time called the Cambrian period.

Some scientists using a method called the molecular clock say evidence suggests sponges appeared around a billion years ago. The molecular clock method dates changes in living things based on the idea that genetic change takes place at a regular rate over long periods of time.

But no supporting physical evidence for the first appearance of sponges had been found.

"This would be the first time that a sponge fossil has been found from before the Cambrian, and not only before, but way before — that's what's most exciting," said Cardenas. He added that the research seems to confirm the molecular clock estimates.

Little fossil evidence exists before the Cambrian period, when animals first developed hard bones, exoskeletons and shells. Those structures are more likely to be preserved.

The time period of 890 million years ago is important. If the organism is confirmed as a sponge, the discovery would prove that the first animals developed before oxygen reached a level scientists thought was needed for animal life. But recent research suggests that some sponges can survive with little oxygen.

"Everything on Earth has an ancestor," said Roger Summons. He is an MIT geobiologist who also was not involved in the research. He said it has always been predicted that the first proof of animal life would be small and mysterious.

sponge –n. a kind of sea animal that lives in colonies and forms hard structures in the water

geologist –n. a scientists who studies the rocks to learn about the history of the Earth and its life

fossil –n. the remains of ancient plants or animals that have become preserved as minerals in rocks

exciting –adj. causing a feeling of interest and energy

exoskeleton – n. a rigid covering on the outside of the body in some invertebrate animals