Update Required To play the media you will need to either update your browser to a recent version or update your Flash plugin.
By Christopher Cruise
02 October, 2014


As the world's population grows, extreme weather conditions affect more and more people. The weather events may include flooding, powerful storms and droughts – or lack of rain. Many scientists are predicting that, while the number of storms may not increase, their strength will.

The issue is of interest to officials with the Aquarium of the Pacific in Los Angeles, California. The aquarium is using a federal government program to help educate people about the effects of extreme weather.

Mark Jackson is a weather expert with NOAA -- the National Oceanic and Atmospheric Administration.

"Extreme weather is the norm across the globe. There are certain things such as heat waves, such as droughts, and in some parts of the globe heavy precipitation, that we are seeing an increase in these events."

But other scientists say extreme weather is here to stay. Glen MacDonald is a professor of geography at the University of California, Los Angeles. 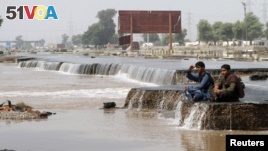 Flood victims sit by a damaged road in Punjab province September 15, 2014. About 150,000 people were still stranded in their homes a week after Indian Kashmir's worst flood in over a century.

Mark Jackson says the number of hurricanes and typhoons has not increased over the past 50 years. But he says those storms have become more powerful, and he believes that will continue.

Professor MacDonald is careful about predicting extreme weather events. He says scientists have just 150 years of weather records to examine.

Scientists do agree that weather events such as storms and droughts will continue to happen. They say reducing the production of greenhouse gases could help, but that takes time. Studies have linked such gases to rising temperatures in earth's atmosphere.

A way of predicting weather for a period longer than 14 days could help reduce the costly effects of extreme weather. Mr. Jackson says NOAA is developing a program that he hopes will be successful in predicting the weather between 15 and 30 days into the future.

"It's very possible and it's something that can be a very powerful tool to help us better adapt and be prepared for these extreme events."

Jerry Schubel is the president of the Aquarium of the Pacific in Los Angeles. He says people must understand the seriousness of extreme weather, and take action when such weather is predicted.

"Improved forecast and longer warning times are of little value unless they are heeded."

NOAA has developed an educational program it calls "Science on a Sphere." The federal agency hopes the program will help people better understand the environment and the planet, including storms, climate change, and ocean temperature. It shows videos on a large model of the Earth.

"There's no place in the world that is immune."

More than 100 museums and other buildings around the world are using the program to educate people about extreme weather. People in Europe, Asia and North and South America are learning about the environment and how to live on our quickly-changing planet.

*This story was reported by correspondent Elizabeth Lee in Los Angeles. Christopher Cruise wrote it for Learning English. George Grow edited it.

extreme – adj. more than the usual or accepted

geography – n. an area of study that deals with the location of countries, cities, rivers, mountains and lakes

production/produce – v. to make; to create; to cause something to be; to manufacture

prediction/predict – v. to say what one believes will happen in the future.