Update Required To play the media you will need to either update your browser to a recent version or update your Flash plugin.
By Mario Ritter Jr.
17 March 2022


Scientists have discovered that a giant tortoise on one of Ecuador's Galapagos Islands is really a new species that had been misidentified earlier.

Ecuador's Galapagos National Park announced the findings from a recent study. Researchers from Newcastle University in England, Yale University in the United States, and the Galapagos Conservancy, an American non-profit group, carried out the study.

The researchers said the giant tortoises living on San Cristóbal Island had been identified with the scientific name of Chelonoidis chathamensis. But the researchers now recognize them as genetically different species, the park said in a statement. 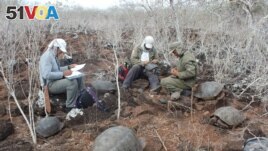 "The scientists concluded that nearly 8,000 tortoises which exist today on San Cristobal are not Chelonoidis chathamensis," park officials said. They added that the tortoises appear to be a completely new lineage that has yet to be described.

Researchers made the discovery through a genetic comparison of the animals with a sample from the already described species.

The lineage once thought to belong to the San Cristóbal tortoises may belong to a species that disappeared from the island. It may have lived at the same time as the surviving lineage, the statement said.

"The team of investigators is recovering more DNA from the species thought to be extinct to clarify the state of the tortoises," the statement said.

It is not clear how the two species — the one that is still on the island and the one that disappeared forever—are related.

Genetic studies of surviving Galapagos tortoises began in 1995. Four years later, scientists began studying samples from extinct species of the animals. The researchers said at least 14 species from the islands have been described by science.

The study appeared in the publication Heredity last month.

The researchers said understanding the history of the giant tortoises on San Cristóbal Island could increase knowledge of how the animals developed across the Galapagos.

The animal life of the Galapagos Islands is famous for influencing scientist Charles Darwin's development of the theory of evolution. That is the idea that species change over large amounts of time. Scientists have studied the unusual species of animals on the islands which are an internationally recognized protected area.

lineage –n. the line of ancestors of a living thing

clarify – v. to make (something) easier to understand

sample –n. a small amount of something that gives you information about the thing it was taken from; an example of something