Update Required To play the media you will need to either update your browser to a recent version or update your Flash plugin.
By Dan Novak
24 July 2021


A new report says that more than 10,000 kinds of living things could disappear forever because of the Amazon rainforest's destruction.

The rainforest surrounding South America's Amazon River is the world's largest. The report said 35 percent of the rainforest has been destroyed or damaged.

The report is by the Science Panel for the Amazon. The project brought together 200 international scientists through the United Nations Sustainable Development Network. It is a detailed study of the Amazon rainforest and its importance to the world's climate. 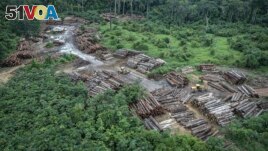 Reducing deforestation and forest destruction to zero in less than 10 years "is critical," the report said. The scientists also called for replanting trees that were destroyed.

The rainforest stores large amounts of carbon and is extremely important in fighting climate change. The report said that the plants and soil of the Amazon hold 200 billion metric tons of carbon. That is 400 percent of the world's yearly carbon dioxide emissions.

The continued destruction of the Amazon rainforest also threatens more than 8,000 plants and 2,300 animals, the report added.

Mercedes Bustamante is a professor at the University of Brasilia. She spoke in an online presentation of some of the study's findings. She said the destruction of the Amazon also presents a serious risk to humans.

"There is a narrow window of opportunity to change this trajectory," she said. "The fate of Amazon is central to the solution to the global" crisis.

Colombia's former President Juan Manuel Santos also spoke during the online discussion. He said there has been a lack of political leadership among the eight countries in the Amazon area.

The report said 18 percent of the Amazon area has already been deforested -- mostly for agriculture and illegal timber. Another 17 percent of the rainforest has been damaged.

Scientists said the main goal should be protecting existing plants and bodies of water rather than repairing damaged areas.

Marielos Pe&#241;a-Claros is a professor at Wageningen University in the Netherlands. She said: "Restoration actions can be costly and complex to implement, so it's actually better to avoid deforestation," she said.

A separate study, released in the science publication Nature, said that some parts of the Amazon are releasing more carbon than they take in.

Luciana Gatti from Brazil's space research agency led the study. She said carbon emissions are highest in the southeastern part of the Amazon area, where there are high rates of deforestation. She said many trees there are dying from lack of rain and rising temperatures.

emission — n. the act of producing or sending out something (such as energy or gas) from a source

opportunity — n. a chance or situation in which something can be done or an aim can be reached

trajectory — n. often used figuratively to describe a process of change or development that leads toward a particular result

fate — n. the future that people or things will have

timber — n. trees that are grown in order to produce wood

restoration — n. the act or process of returning something to its original condition by repairing it, cleaning it, etc.

implement — v. to begin to do or use (something, such as a plan) : to make (something) active or effective