Update Required To play the media you will need to either update your browser to a recent version or update your Flash plugin.
By Mario Ritter Jr.
16 February 2020


A team of scientists plans to explore a little-known part of the ocean to search for new sea life and to investigate the effects of pollution and climate change.

The scientists will enter what they call the "Midnight Zone" of the Indian Ocean. It is an area at a depth of about 1,000 meters below the surface where light does not reach but life still thrives. The project is expected to begin on March 16 and to last about five weeks. The scientists aim to explore huge underwater mountains also known as seamounts.

The scientists involved in the project are part of Nekton, an ocean research group that works with the University of Oxford in Britain. They are working with the Seychelles' and Maldives' governments in an effort to protect ocean areas. 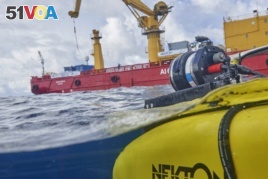 The manned submersible emerges from the water after a dive off the coast of the island of St. Joseph in the Seychelles, Monday April 8, 2019. For more than a month researchers from Nekton, a British-led scientific research group.

Oliver Steeds is the director of the Nekton effort. He told the Associated Press that the area his team will explore is home to many forms of life. "What we do know is that beneath 1,000 meters, there's no light down there, but a lot of animals...are bioluminescent. It's life that glows," he said.

Speaking to AP in Barcelona, Spain, Steed noted that this team was going into an unknown part of the ocean.

A submarine unlike any other

The Nekton scientists will be using one of the most modern deep sea submarines in the world. It is named Limiting Factor.

Last August, the Limiting Factor completed another project: to dive to the deepest point in each of the world's five oceans. That effort was called the Five Deeps Expedition. The deepest of these dives took the submarine to nearly 11,000 meters below sea level.

The Limiting Factor is built to withstand the huge pressure that exists in the ocean's deepest places. The compartment for the crew of two people is surrounded by titanium nine centimeters thick. The submarine also carries enough emergency oxygen for up to 96 hours.

Robert McCallum is the leader of the expedition. He said vehicles that can dive deep into the ocean are rare.

The scientists will use sensors and mapping technology to identify new species and landforms deep beneath the sea. But, they also want to observe the effects humans have on the deep sea environment. They will be trying to measure the presence of plastic pollution and possible effects of climate change.

Limiting Factor crew already have seen evidence that pollution is affecting places considered untouched. In May, they saw a plastic bag at the bottom of the Mariana Trench, the deepest point in the world's oceans.

Dan Laffoley is a marine expert for the International Union for Conservation of Nature, a group based in Switzerland. He said exploration of the Earth's living space is extremely important. He added, "...over 90 percent of that living space is in the ocean and most of that ocean is unexplored."

Laffoley said it is urgent, during a time of change, "...that we get people down there, we get eyes in the ocean and we see what's happening."

The Nekton scientists will combine their observations with an earlier study of the deep Indian Ocean last year. They plan to present their findings in 2022.

James Brooks wrote this story for AP. Mario Ritter Jr. adapted it for VOA Learning English. Hai Do was the editor.

Do you think deep sea exploration is important for our knowledge of Earth? Let us know in the comment section below.

compartment –n. a separate area within a vehicle