Update Required To play the media you will need to either update your browser to a recent version or update your Flash plugin.
By Bryan Lynn
27 November 2022


An international group of scientists has expanded the metric terms used to express the largest and smallest measurements.

The changes were decided at a recent meeting of the 27th General Conference on Weights and Measures, which took place near Paris, France. The group sets international standards for scientific measurements.

The new terms are known as prefixes. A prefix is a word, letter or number placed before a base word to change its meaning. 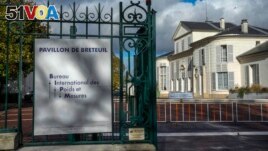 The entrance of the International Bureau of Weights and Measures is pictured in Sevres, outside Paris, Thursday, Nov. 17, 2022. (AP Photo/Michel Euler)

Examples of existing prefixes used in the metric system are kilo- and milli-. When these prefixes are added to the metric unit meter, they become kilometer and millimeter.

The worldwide standard for the metric system is known as the International System of Units. Changes to this standard are decided by scientists and government representatives from around the world.

Britain's National Physical Laboratory, which led the push for new prefixes, confirmed the new changes were approved in a resolution at the meeting.

It marked the first time in more than 30 years that new terms have been added to the International System of Units. Representatives attending the meeting said the need for new prefixes had grown because of scientific advances and huge increases in digital data storage.

The new prefixes were created to express "the biggest and smallest levels ever measured," said Richard Brown. He is head of Metrology at the National Physical Laboratory.

The new terms for the largest units are ronna and quetta. And the new expressions for the smallest are ronto and quecto.

Ronna is represented by a one, followed by 27 zeros, while quetta has 30 zeros. For measuring extremely small things, ronto has 27 zeros after the decimal point, while quecto would have 30 zeros.

Brown told The Associated Press the new prefixes will make it easier for scientists to describe things they already known about. He said the Earth weighs about six ronnagrams. The weight of Jupiter, on the other hand, can be expressed as two quettagrams.

The mass of an electron can be described as one rontogram. And, scientists can now say that a single byte of data on a smartphone increases the phone's mass by one quectogram.

Brown said "the diameter of the entire observable universe is just one ronnameter."

He added that the new names were not chosen without careful thought. The first letter of the new prefixes had to be one that had not been used in other prefixes and units.

"There were only the letters ‘r' and ‘q' that weren't already taken," Brown said. "Following that, there's a precedent that they sound similar to Greek letters and that big number prefixes end with an ‘a' and smaller numbers with an ‘o.'"

Brown noted that it was "high time" for the terms to be added. "(We) need new words as things expand," Brown said. "In just a few decades, the world has become a very different place."

Bryan Lynn wrote this story for VOA Learning English, based on reports from The Associated Press, Agence France-Presse and the National Physical Laboratory.

unit – n. a measure used to express an amount or quantity

standard – n. a level of quality, especially one that is acceptable

diameter – n. a straight line that goes from one side of a circle to the other side and through the center, or the length of this line

precedent – v. an action or decision that is used as an example when someone wants to do a similar thing in the future