Update Required To play the media you will need to either update your browser to a recent version or update your Flash plugin.
By Pete Musto
02 August, 2018


An international team of scientists says it has moved a step closer to creating artificial embryos.

The team used stem cells from mice. Stem cells are simple cells that can develop into other kinds of cells. The scientists used the stem cells to build a structure that is similar to an embryo.

Experts say the results of the research suggest that human embryos could be created in a similar way in the future. This would make it possible for scientists to use artificial embryos, rather than real ones, to research the very earliest period of human development.

Magdalena Zernicka-Goetz is a professor at Britain's Cambridge University. She was the leader of the research team. In her earlier work, she was able to create a simple structure similar to a mouse embryo in a laboratory dish.

That research involved two kinds of stem cells and a three-dimensional structure on which they could grow.

Zernicka-Goetz's team developed the structures further in the new research published in late July in the journal Nature Cell Biology.

The researchers said they used three kinds of stem cells to start an important process. In this process, embryonic cells begin self-organizing into the correct structure for an embryo.

"Our artificial embryos underwent the most important event in life in the culture dish," Zernicka-Goetz said in a statement about the work. "They are now extremely close to real embryos." 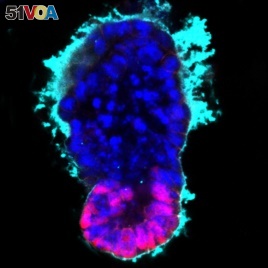 Synthetic embryo like structure with embryonic part generated from the embryonic stem cells (pink) and and extra-embryonic tissues in blue. (Credit: Zernicka-Goetz lab, University of Cambridge)

That is the point in many pregnancies when problems happen and human embryos most often die. Scientists still know very little about this early period.

"So it should be possible to understand exactly what is going on during this...period in an embryo's life, and why sometimes this process fails," Zernicka-Goetz said.

Christophe Galichet is a senior research scientist at Britain's Francis Crick Institute. He was not directly involved in this work, but he agreed with what the researchers are suggesting.

Galichet told the Reuters news service in an email: "While (this study) did not use human stem cells...the technique could one day be applied to studying early human embryos."

Galichet said the research could be important to future studies: "These self-assembled human embryos would be ... invaluable tools to understand early human development."

The Reuters news service reported this story. Pete Musto adapted it for VOA Learning English. Mario Ritter was the editor. We want to hear from you. What do you think will come of scientists creating artificial human embryos? Write to us in the Comments Section or on 51VOA.COM.

artificial – adj. not natural or real

mice – n. very small animals that have a pointed nose and a long, thin tail

dish – n. a shallow container that holds something other than food

technique - n. a way of doing something by using special knowledge or skill

apply to – v. to use an idea, method, or law in a particular situation

assemble(d) – v. to connect or put together the parts of something, such as a toy or machine