Scientists Consider Cause of Fast Radio Bursts in Space

Update Required To play the media you will need to either update your browser to a recent version or update your Flash plugin.
By Faith Pirlo
19 June 2022


In 2007, scientists at West Virginia University first identified an unusual intense burst of radio waves from space. Since then, these fast radio bursts, or FRBs, have been a mystery to astronomers.

They only knew that FRBs are pulses of radio waves and that FRBs come from places within our galaxy, the Milky Way, and other galaxies.

Recently though, researchers identified an FRB that was first found in 2019 with the world's largest single-dish radio telescope, called FAST. It is in the Guizhou Province in China. The FRB was studied more using the VLA telescope in the state of New Mexico in the U.S. The FRB is in a very small galaxy, which is almost 3 billion light-years from Earth. A light year is the distance light travels in one year. 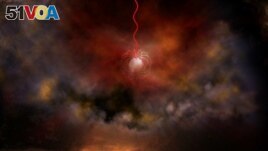 Scientists believe that extreme objects may release these fast radio bursts. These objects could include unusual kinds of stars such as a neutron star. A neutron star is the center of a large star at the end of its life cycle that explodes as a supernova. Another is a magnetar, which is a neutron star with a very strong magnetic field. And another possible cause of an FRB is a black hole eating a nearby star.

Casey Law is an astronomer at the California Institute of Technology. He was co-writer of a recent study of the 2019 FRB that was published in Nature. He said FRBs are quick flashes of radio energy that turn on and off for only a millisecond. They can be observed across the universe. Some objects produce a storm of repeated FRBs, and some only burst once.

The 2019 FRB repeats. Weaker radio signals continue between the bursts, so it appears to be always "on." Most known FRBs, nearly 500 of them, do not repeat.

Astronomers think that the FRB described in the Nature study is only in the beginning of its life. It is still surrounded by thick material from the supernova explosion that created a neutron star. The scientists suspect that the repeating bursts come from younger FRBs.

Di Li is the chief FAST telescope scientist and with the Chinese Academy of Sciences in Beijing. He co-wrote the Nature study. He said, "We still call fast radio bursts a cosmic mystery and rightfully so."

Although FRBs are still not completely understood, the new repeating FRB may help scientist discover the cause of radio bursts. Years ago, scientists faced a similar mystery with gamma-ray bursts. These events are now believed to result from the death of very large stars, or from neutron stars or magnetars joining to form a black hole.

But researchers have a lot more to learn about FRBs.

"We know more and more about the phenomenon, where the sources live, how often they burst...However, we are still chasing for that golden measurement that will give us a definitive answer to what causes them," Law said.

Will Dunham wrote this article for Reuters. Faith Pirlo adapted it for Learning English.

astronomer –n. a scientist who studies stars, planets and objects in outer space

pulse – n. a short increase in an amount of electricity, light or sound

light year – n. the distance light travels in a year, about 9.5 trillion kilometers

supernova – n. a star that has exploded, strongly increasing its brightness for a period of time

black hole – n. a very dense area in space where the gravitational pull is so powerful that nothing, not even light, can escape

cosmic – adj. of or relating to the universe or outer space

phenomenon – n. an event or interesting happening that can be observed and studied and that is not easy to explain or understand

definitive – adj. clear, sure and not likely to change

What do you think of fast radio bursts? We want to hear from you. Write to us in the Comments Section.