Update Required To play the media you will need to either update your browser to a recent version or update your Flash plugin.
By Christopher Jones-Cruise
09 June, 2017


One in eight people in the world do not get enough to eat.

One in three are lacking in what health experts call essential nutrients. These are the vitamins, minerals, fatty acids and other nutrients that the body needs for good health.

A Washington, D.C.- based organization is trying to reduce hunger and its effects through better, more-nutritious crops. 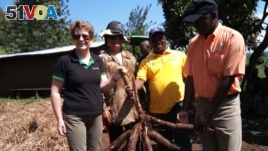 Beverly Postma of Harvest Plus during a visit to Bukavu, DRC on December 16, 2016. (VOA/Ernest Muhero)

The group is creating seeds that grow into more nutrient-rich crops than normal ones. This process called biofortification.

A non-profit group called HarvestPlus created the seeds. Bev Postma is the head of HarvestPlus.

"It's very important that the seeds are not just high in nutrition, but that they are still high-yielding, they're pest-resistant, they're climate-resistant -- because these are the things that farmers still want more."

If people do not get enough essential nutrients from the foods they eat, they are more likely to get sick or develop infections. In some cases, they can go blind or they may not grow to their full height and weight.

Postma says two billion people are at risk of the most serious effects of this "hidden hunger." She says 450,000 people die every year because of poor nutrition.

HarvestPlus scientists have created 150 kinds of 12 food crops, including corn, beans, rice, lentils and wheat. They have shipped the seeds to 30 developing countries, reaching an estimated 20 million people since 2003.

Postma says the group hopes to reach one billion by 2030.

"We're not trying to change behavior -- we are looking to see what people are eating and we're just switching out to make that food more nutritious."

Biofortified seeds are not genetically engineered.

HarvestPlus distributes its seeds through seed companies and sometimes directly to farmers.

"We've learned that in some countries if we give the seed away, we can encourage the farmers to not just grow this new variety, but then ask them to give the next year's seed that they harvest to four new farmers."

yield – v. to produce or provide (something, such as a plant or crop)

switch – v. to change or replace (something) with another thing

distribute – v. to give or deliver (something) to people