Update Required To play the media you will need to either update your browser to a recent version or update your Flash plugin.
By Bryan Lynn
03 October, 2018


There have been many books written and movies made describing the ability of people to communicate through thoughts.

While this idea has not been demonstrated in reality, physicists and neuroscientists have reported some progress in recent years.

Now, scientists say they successfully connected the brains of three people who were able to send thoughts to each other. A group of researchers reported their new findings in a scientific paper posted on the internet.

The scientists – from the University of Washington and Carnegie Mellon University - say they believe their experiment is the very first of its kind. The team used electronic tools to complete the test of brain-to-brain communication. 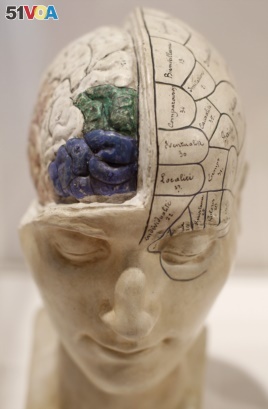 A 19th century model of a head with brain exposed is seen on display at the exhibition 'Brains - The Mind as Matter' at the Wellcome Collection in London, Tuesday, March 27, 2012. (AP Photo/Alastair Grant)

It was not the first time this same group of researchers connected different human brains, MIT Technology Review reports. In 2015, they used similar equipment to link up the brains of two people. Part of that experiment involved the two test subjects playing a simple word game, the publication said.

The group calls its new project BrainNet. It described the system as the first "direct brain-to-brain interface" designed to help people cooperate in problem solving.

In the experiment, the scientists said only brain-to-brain communication was used as the three individuals played a video game together. The game was a simplified version of the video game Tetris, which became hugely popular in the 1980s. In the game, players try to match colored blocks falling onto a puzzle.

Two kinds of electronic devices were worn by people taking part in the experiment. Electroencephalograms, or EEGs were used to record electrical brain activity of subjects. The other, called transcranial magnetic stimulation, or TMS, is a process that magnetically stimulates a part of the brain. This was used to send information to others involved in the experiment.

During the game, two players were chosen as "senders" and a third as a "receiver." The senders had brain signals "decoded" using real-time EEG information. The decoding process recorded each sender's decisions about suggested moves in the game. The sending and receiving of information was carried out by the subjects looking at different forms of light.

The decisions were then transmitted through the internet to the brain of the receiver, who could not see the video game. The receiver then uses the information from the senders to decide on what game moves to make. An additional part of the game provided a second chance for senders to examine the receiver's decision and send feedback to the receiver's brain.

In this May 31, 2013, photo, research assistant Kevin Real wears an EEG net for detecting brain activity which is hooked up to a monitor, at the University of Nebraska's Center for Brain, Biology and Behavior in Lincoln, Nebraska. (AP Photo/Nati Harnik)

The researchers said experiments were carried out with five different groups, each with three human subjects. They reported all the groups were able to use BrainNet to perform the game moves with a success rate of 81 percent.

The scientists added noise to one sender's signal to test whether that would affect the receiver's responses. They reported that the receivers learned to recognize the most reliable senders by using only the information transmitted to their brains.

The researchers wrote that the results "raise the possibility of future brain-to-brain interfaces that enable cooperative problem solving by humans using a ‘social network' of connected brains."

Bryan Lynn wrote this story for VOA Learning English, based on the scientific report and other online sources. Hai Do was the editor.

What do you think about technology developments aimed at brain-to-brain communication. Write to us in the Comments section, and visit 51VOA.COM.

puzzle – n. a game or activity in which places have to put pieces together or answer questions using skill

decode – v. discover the meaning of something

reliable – adj. able to be trusted or believed

possibility – n. a chance something may happen or be true

enable – v. make it possible for someone to do something