Update Required To play the media you will need to either update your browser to a recent version or update your Flash plugin.
By Jonathan Evans
09 November, 2019


More than 11,000 scientists are warning that the Earth, in their words, "clearly and unequivocally faces a climate emergency."

The scientists represent several fields of study and come from 150 countries around the world. They approved a report that appeared in the publication Bioscience earlier this month. It warns that the world would face "untold human suffering" if it does not make deep and lasting shifts in human activities that influence climate change.

The new report is called the "World Scientists' Warning of a Climate Emergency." Three leaders of the study are from the United States. They are ecologists Bill Ripple and Christopher Wolf of Oregon State University and William Moomaw of Tufts University in Massachusetts. The three worked on the study with scientists from universities in South Africa and Australia. 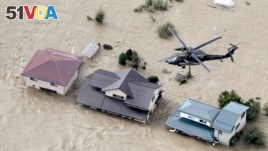 This is the first time a large group of scientists have jointly used the word "emergency" when talking about climate change.

"Despite 40 years of global climate negotiations...we have generally conducted business as usual and have largely failed to address this predicament," the study said. "Climate change has arrived and is accelerating faster than many scientists expected."

The report identified six areas that the world needs to deal with immediately. The scientists appealed to nations to use energy more efficiently and cut their use of fossil fuels. They suggested that lawmakers approve taxes on the burning of carbon-based fuels, such as coal, oil and natural gas.

The scientists expressed support for women's rights and making family planning services "available to all people." They said this would help to reduce sudden or unexpected changes in the size of the human population.

The report urges people to move toward more of a plant-based diet.

Other areas of concern include preventing the destruction of forests and permanent loss of some plant and animal species.

The reported noted that it will most likely take strong actions by the public to move politicians to approve lasting policy changes.

The scientists added, "We believe that the prospects will be greatest if decision-makers and all of humanity promptly respond to this warning and declaration of a climate emergency, and act to sustain life on planet Earth, our only home."

accelerating – adj. increasing in speed or rate of occurrence

address – v. to deal with; give attention to

fossil fuels – n. fuels such as coal, oil, or natural gas that formed in the earth from dead plants or animals

prospects – n. opportunities for something to happen

shifts – n. changes in how something is done or how people think about something