Update Required To play the media you will need to either update your browser to a recent version or update your Flash plugin.
By Jonathan Evans
21 October, 2014


Testing new drugs for safety and effectiveness is a costly process in the United States. It also can take a lot of time. Some scientists are now designing silicon computer chips that act like human organs. The scientists think they have found a way to make the process faster and more economical.

The silicon chips are smaller than a child's hand. Each one has living cells that act and react like a human organ. The chips are being created as part of a program to test the safety of drug compounds. It is called the Tissue Chip for Drug Screening Program.

It is a project of the US National Center for Advancing Translational Sciences, or NCATS. Danilo Tagle is the center's Associate Director. He says a three-dimensional computer chip can be designed to act like a human lung. He describes how such a device would operate.

Some computer chips contain very small models of the human digestive system. They copy the real function or duties of the human stomach and intestine, moving when breaking down food.

Drugs are added to the tiny organs for testing through instruments known as micro-tubes. Experiments with the tissue chips have produced more detailed information than tests using animal or cell models. 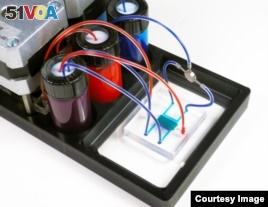 NCATS just announced $17 million in grants to develop an entire human organ system over the next three years.

Researchers at Columbia University are working on a project that would combine models of the heart, liver and circulatory system. The scientists hope to test how well some drugs work on diseases of the heart and liver.

Researchers say they can safely test the effects of a drug on different organ systems. They can use the tissue chips to observe a drug's effect on the organ or organs it is designed to target.

Scientists want to make the process of developing drugs simpler. They hope the chips will help them find the safest and most successful drugs before human testing begins.

cardiopulmonary – adj. relating to the heart and lungs.

grant – n. an amount of money that is given to someone by a government or company to be used for a particular purpose such as scientific research

model – n. an example; something, usually small, made to show how something will look or work

silicon – n. a chemical element that is found in the Earth's crust and is used especially in computers and electronics

Now it's your turn to use these Words in this Story. In the comments section, write a sentence using one of these words and we will provide feedback on the use of vocabulary and grammar.