Scientists Develop a Robot That Can Assemble Itself

Update Required To play the media you will need to either update your browser to a recent version or update your Flash plugin.
By VOA
01 September, 2014


Origami is the Japanese art of shaping paper to look like animals, flowers and other objects. Now, Harvard University scientists have modeled, or formed a robot on the ancient art form. They have created designs that robots can follow to assemble themselves, or put themselves together.

Sam Felton builds robots. The Harvard graduate student works at the university's Microrobotics Laboratory. His most recent creation is a robot 18 centimeters wide and 15 centimeters long. It has four moving legs and looks like a crab. Sam Felton spoke to VOA on Skype.

"We started with the desire to make robots as quickly and cheaply as possible. And so we looked to origami in order to find ways to create a very complex and functional machine. Mathematically, origami can create almost anything you want. But the trick is to actually get it to happen in real life with real materials."

Mr. Felton starts with what are called shape memory polymers. These are flat plastic sheets that change shape when they are heated. Electronics placed between the layers, or levels, of material are programmed, or set, to start the folding action. A battery provides the power.

The paper starts folding itself within 10 seconds.

"And as soon as that brain is told to start running, it goes through the process of telling each circuit to turn on or off and once it knows that it's assembled, it tells the robot to walk forward."

It takes about four minutes for the robot to assemble itself. 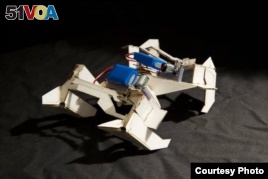 A self-folding robot is seen this photo provided by MIT.

"What we've shown here is that you can embed all these systems onto an autonomous robot and cause it to control its own folding."

Mr. Felton wrote about his work in the journal Science. He says the process permits researchers to quickly produce complex robots that can build themselves into different sizes, depending on what they must do. The robots are also strong for their weight. One valuable quality is that self-building robots can be shipped flat in large numbers, then unfold themselves where they are needed.

"I like to think about assembling in space. If you could send a ream of flat sheets up, that then turn themselves into satellites or even send that team to another planet and have it turn itself into a new base."

Sam Felton says such machines have other possible uses. They could, for example, be placed in the narrow spaces of a collapsed building and unfold themselves to look for and rescue people.

This story was based on a report by Rosanne Skirble and adapted by Mario Ritter.

programmed – adj. something that has been given computer instructions to perform a task, to behave or think in a certain way

fold – v. to lay one part over another

robots – n. a machine that moves and performs work