Update Required To play the media you will need to either update your browser to a recent version or update your Flash plugin.
By Bryan Lynn
16 July 2022


Chinese scientists say they have developed a robotic fish that can remove microplastic particles from water environments.

Researchers working on the project say the robots could help to clean up plastic pollution in oceans around the world.

The robotic swimmers are about 1.3 centimeters long. They are made of a soft chemical compound. The robots are designed to absorb microplastics while moving through the water. 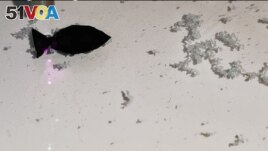 A fish-shaped robot, which researchers say can suck up microplastics in shallow water, moves under the direction of a near-infrared (NIR) light, in this screen grab taken from a handout video provided to Reuters July 12, 2022. (Sichuan University/Handout via REUTERS)

The project was launched by a team at Sichuan University in southwestern China. The researchers said the robots have already performed well in shallow water and they plan to carry out more tests in deeper waters.

The scientists reported their findings in a new study in Nano Letters. The publication comes from the American Chemical Society, a nonprofit organization supported by the U.S. Congress.

The robotic fish were built to target microplastic particles, which are smaller than five millimeters. Studies have confirmed that microplastic pollution has been discovered in many natural environments. The material comes from the breakdown of manufactured plastic products and industrial waste.

The team said the robots can be controlled by light. Turning "a near-infrared light laser" on and off causes the fish's tail to move back and forth, the American Chemical Society said.

The robotic fish can swim up to 2.76 body lengths per second. The researchers said this is faster than most similar soft robots.

Wang Yuyan was a member of Sichuan University's research team. She told Reuters news agency that the small, lightweight robot is currently being used to collect microplastics for research purposes. But Wang added that the team plans to expand that use so the robot fish can remove larger amounts of microplastic waste from deep ocean areas.

The fish can take in different kinds of microplastics and even repair itself when damaged, the researchers said. And if a robot fish is accidentally eaten by a real fish, it could safely digest the material, the team added.

Wang said similar robots could be developed to be placed inside the human body to remove unwanted materials or disease.

absorb – v. to take liquid in through a surface

digest – v. to change food in the stomach into substances the body can use