Update Required To play the media you will need to either update your browser to a recent version or update your Flash plugin.
By Bryan Lynn
29 May 2022


Researchers say they have discovered a chemical found in sea corals that could be effective in treating cancer.

Scientists had been searching for the compound for more than 25 years after early studies in the 1990s suggested it could slow cancer cell growth. A researcher finally discovered the substance in a common kind of soft coral off the coast of the American state of Florida.

A research team from the University of Utah has confirmed the discovery. The team said their results could lead to widespread production of the substance for use in cancer drugs. 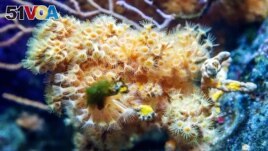 A coral reef is seen at the Aquarium Pula, Croatia, July 25, 2018. (REUTERS/Antonio Bronic)

The researchers recently described their findings in a study in the publication Nature Chemical Biology.

The use of natural substances to treat disease is not new, the U.S. National Oceanic and Atmospheric Administration (NOAA) reports. Compounds from all kinds of organisms – including sea life, snakes, spiders and other animals – have long been studied and tested as possible treatments for many health conditions.

Since many corals stay in one place, they have developed chemical defenses to protect against other forms of sea life that could threaten them, NOAA reports. Scientists study such chemicals in an effort to find effective medical uses.

But a major barrier to these efforts has been the difficulty of gathering enough of these compounds to carry out effective research.

The chemical used in the latest study is called eleutherobin. It was discovered in soft corals near Australia. Scientists reported in the 1990s that the chemical had cancer-fighting properties.

Researchers involved in the study said the chemical can play a part in breaking down important cell structures. It is used by soft corals as a defense against predators. But scientific studies have suggested the compound also shows promise in reducing cancer cell growth.

The studies led scientists to keep searching for large amounts of the chemical that would be necessary to carry out additional testing and possibly develop new cancer drugs. But those efforts were unsuccessful for many years.

Then, a scientist working on the University of Utah team, Paul Scesa, found a soft coral in the ocean off the Florida coast that contained eleutherobin.

The team sought to find out whether the corals made the chemical themselves or whether it was produced by symbiotic organisms living inside the corals. Scesa said in a statement it did not "make sense" to him that the compound would only be produced by other organisms.

His team knew, for example, that some soft corals do not have symbiotic organisms and yet their bodies contain the same collection of chemicals.

To test their theory, the researchers attempted to find out how the corals were producing the compound. To do this, they needed to study the corals' genetic code to learn whether it included instructions on how to produce the chemical.

This process is possible through modern methods for studying the DNA of organisms. DNA is present in nearly all living things and is the carrier of genetic information.

The next step was difficult because the scientists did not know what the instructions for making the chemical should look like.

But they reported they were able to identify parts of DNA in the coral that were very close to genetic instructions for similar compounds in other species. They were then able to provide those instructions to bacteria grown inside a laboratory. The team reported that the bacterial microorganisms were able to copy the first steps of making eleutherobin.

"This is the first time we have been able to do this with any drug lead on Earth," said lead researcher Eric Schmidt. He is a professor of medicinal chemistry at the University of Utah Health.

The researchers say their experiments demonstrated that it should be possible to manufacture the chemical in the laboratory. This could lead to possible widespread production of new anti-cancer drugs.

Scesa said he hopes to one day be able to hand over the medicine to a doctor. "I think of it as going from the bottom of the ocean to bench to bedside," he said.

Bryan Lynn wrote this story, based on reports from the University of Utah Health, Nature Chemical Biology and NOAA.

coral – n. a hard or soft, usually pink or white substance produced by a type of very small sea animal

predator – n. an animal that hunts and kills other animals for food

symbiotic – adj. involving two kinds of animal or plant in which each provides the conditions necessary for the other to exist

genetic code –n. information from DNA or RNA that is used to create an organism's proteins

bench – n. a long table for doing work on