Update Required To play the media you will need to either update your browser to a recent version or update your Flash plugin.
By Christopher Jones-Cruise
24 May, 2017


Scientists say they have discovered a possible cure for all five known Ebola viruses. Antibodies that are used in the cure were discovered in the blood of a survivor.

Kartik Chandran of the Albert Einstein College of Medicine helped discover the antibodies. They are described online in the journal Cell.

Chandran says studies of the antibody in non-human primates have shown positive results. He says he is optimistic that the antibodies can be used to protect and treat people, too.

The virus was given the name Ebola because the first recorded outbreak of the disease took place along the Ebola River in the Democratic Republic of Congo -- then known as Zaire -- in 1976. 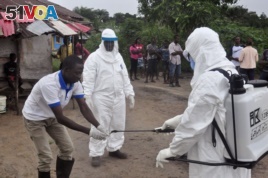 FILE - Health workers wash their hands after taking a blood specimen from a child to test for the Ebola virus in a area were a 17-year old boy died from the virus on the outskirts of Monrovia, Liberia.

During that epidemic, researchers were studying an anti-Ebola drug called Zmapp. Doctors began using it even before the study was complete.

Zmapp uses antibodies discovered in mice. They use the body's natural immune system to fight infection. If the drug is given within five days after Ebola infection symptoms appear, it can cure the disease.

But researcher Kartik Chandran says Zmapp is effective only against Ebola Zaire. It does not fight the other four known Ebola viruses.

Chandran says the recently discovered human antibodies attack and destroy all five of the viruses. Researchers say the antibodies work by interfering with a process that the disease uses to infect and multiply inside cells.

The drug company Mapp Pharmaceutical Incorporated is now testing the antibodies in monkeys that have been exposed to Ebola. Spokespeople for the company say the antibodies have so far been safe and effective.

Chandran says he hopes the antibodies can also be tested in people soon. And, he says, he hopes they can ultimately be used both as a treatment and as a vaccine to prevent people from getting Ebola in the first place.

cure – n. recovery or relief from a disease

antibody – n. a substance produced by the body to fight disease

vaccine – n. a substance that is usually injected into a person or animal to protect against a particular disease