Update Required To play the media you will need to either update your browser to a recent version or update your Flash plugin.
By Pete Musto
29 April, 2018


Scientists in Britain and the United States have designed a substance that eats plastic. They believe that, in the future, it could help reduce pollution.

The enzyme is able to break down polyethylene terephthalate, or PET. This form of plastic was patented in the 1940s. It is now used in millions of metric tons of plastic bottles.

PET plastics can remain in the environment for hundreds of years. The plastics pollute large areas of land and water around the world.

Researchers from Britain's University of Portsmouth and the U.S. Department of Energy's National Renewable Energy Laboratory made the discovery. They did so while examining the structure of a natural enzyme that is thought to have evolved in a waste recycling center in Japan.

John McGeehan, a professor at Portsmouth, co-led the work. He said the researchers found that the natural enzyme was helping a bacteria break down PET plastic. So, the researchers decided to make small changes to its structure by adding some amino acids.

This led to a valuable change in the enzyme's actions. It made the enzyme's plastic-eating abilities work more quickly.

"We've made an improved version of the enzyme better than the natural one already," McGeehan told the Reuters news service. He added that it may be possible for them to make more improvements to it in the future.

The journal Proceedings of the National Academy of Sciences published the team's findings earlier this month.

The team is now trying to make it possible for the enzyme to be able to break down much larger amounts of PET plastics.

McGeehan said, "It's well within the possibility that, in the coming years, we will see an industrially viable process to turn PET, and potentially other (plastics), back into their original building blocks so that they can be sustainably recycled." 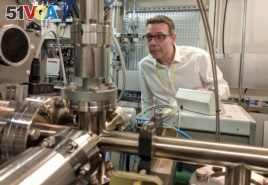 Professor John McGeehan, an X-ray Crystallographer at the University of Portsmouth, stands next to equipment at the Diamond Light Source, the UK national synchrotron, that he used to reveal the atomic structure of an enzyme.

Independent scientists not directly involved with the research said the discovery was interesting. But they warned that the enzyme's development as a possible solution for pollution was still in the early stages.

Oliver Jones is a chemistry expert at the Royal Melbourne Institute of Technology University. He told Reuters that enzymes are not harmful to humans and other animals. They easily break down in natural conditions. Also, extremely small organisms can produce them in large amounts.

"There is strong potential to use enzyme technology to help with society's growing waste problem by breaking down some of the most commonly used plastics," Jones said.

Douglas Kell is a professor of biological science at Manchester University. He said further rounds of work "should be expected to improve the enzyme yet further."

He added that the discovery brings the goal of creating manmade, sustainably recyclable chemical substances much closer to reality.

Kate Kelland, Stuart McDill and Gareth Jones reported this story for the Reuters news service. Pete Musto adapted it for VOA Learning English. Ashley Thompson was the editor. We want to hear from you. Write to us in the Comments Section or on 51VOA.COM.

enzyme – n. a chemical substance in animals and plants that helps to cause natural processes

patent(ed) – v. to get an official document for something that gives a person or company the right to be the only one that makes or sells that thing for a certain period of time

recycling – n. the process of making something new from something that has been used before

amino acid(s) – n. any one of many acids that occur naturally in living things and that include some which form proteins

viable – adj. able to be done or used

sustainably – adv. done in a way so that something is able to be used without being completely used up or destroyed