Update Required To play the media you will need to either update your browser to a recent version or update your Flash plugin.
By John Russell
21 November 2021


Scientists have been able to do a rare study into an important, early stage of human development. They studied an embryo in its third week after fertilization — a moment in time that has previously been difficult to study.

European researchers looked at one embryo that was 16 to 19 days old. It was donated by a woman who ended her pregnancy.

Until now, experts said, researchers have not had a full understanding of this stage of development because human embryos at this level of development are difficult to get. Most women do not yet know they are pregnant at that time. And global rules have until recently forbidden growing human embryos in a lab beyond 14 days. 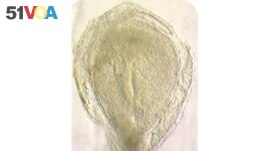 This image from Oxford University shows a human embryo 16-19 days after fertilization. The embryo is undergoing a process called gastrulation, when different cell types are generated and distributed to specific places in the embryo. (University of Oxford via AP)

The study appeared recently online in Nature, a scientific publication. The study looked at "gastrulation," which begins about 14 days after fertilization and lasts a little more than a week. This is when the embryo is still about the size of a small seed.

Shankar Srinivas of the University of Oxford was the lead researcher on the project.

Srinivas described gastrulation as "a process by which you have this kind of explosion of cell diversity."

Srinivas, who worked with other researchers in the United Kingdom and Germany on the project, added that during gastrulation different cells are formed. These cells, he explained, start to be positioned in different places to form the body and its organs.

For many years, the so-called "14-day rule" on growing embryos in the lab has guided researchers, with some places, including the United Kingdom, writing it into law.

Earlier this year, the International Society for Stem Cell Research recommended easing the rule and allowing researchers to grow embryos past two weeks in some situations and after a tough review process. But the rule remains law in the UK.

This research was not subject to the law because the embryo was not grown in a lab. But it is an example of the types of things scientists expect to learn more about if rules are eased.

Researchers found different kinds of cells, including red blood cells and other cells that give rise to egg or sperm cells.

But the researchers did not see neurons, Srinivas said, meaning embryos are not able at this stage to sense their environment.

Oxford University officials said this stage of development has never been fully mapped out in humans before.

The authors said they hope their work not only gives information about this stage of development, but also helps scientists learn about how to make stem cells into particular types of cells that can be used to help heal damage or disease.

Robin Lovell-Badge, a stem cell expert at London's Francis Crick Institute who chaired the group behind the guidelines, said being able to culture human embryos beyond 14 days "would be incredibly important to understand not just how we develop normally but how things go wrong."

Dr. Daniel Sulmasy, director of the Kennedy Institute of Ethics at Georgetown University, said "those of us who are morally conservative" always thought the 14-day rule was somewhat arbitrary. Arbitrary is a term that means not planned or chosen for any particular reason. But, Sulmasy added, at least the rule "was some recognition of the humanness of the embryo."

There will be more research on older embryos, he said. "Part of what science does is to always try to go forward and learn things that are new. And that continues to be a pressure. But the mere fact that we can do something is not sufficient to say that we ought to do it."


Laura Ungar reported on this story for the Associated Press. John Russell adapted it for Learning English. Susan Shand was the editor.

fertilization – n. the action or process of fertilizing an egg

diversity -- n. the quality or state of having many different forms, types, ideas, etc.

neuron – n. medical: a cell that carries messages between the brain and other parts of the body and that is the basic unit of the nervous system