Scientists: Early Humans Were Not as Simple as One Would Think

Update Required To play the media you will need to either update your browser to a recent version or update your Flash plugin.
By Jonathan Evans
01 April, 2018


Scientists have discovered evidence that some of the earliest members of the human race, Homo sapiens, were surprisingly advanced.

Scientists say these early humans knew how to use color pigments found in nature, create advanced tools and trade for supplies with other groups of people.

A report on the discovery was published recently in the journal Science. 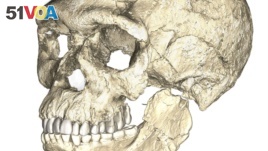 A composite reconstruction of the earliest known Homo sapiens fossils from Jebel Irhoud in Morocco, based on micro computed tomographic scans of multiple original fossils, is shown in this undated handout photo obtained by Reuters, June 7, 2017.

The scientists said they examined artifacts recovered from southern Kenya. Some of the objects are said to date back to 320,000 years ago. They are about the same age as the earliest-known Homo sapiens fossils found in other parts of Africa.

In the report, the researchers described an ochre pigment that produced a bright-red color. They say this pigment could have been used for body painting. They also found tools made from obsidian, a volcanic rock that can have an extremely sharp edge.

The researchers found evidence of obsidian being transported to the Olorgesailie Basin, up to 88 kilometers away from where the rock was found. This discovery led the scientists to believe it had come from another group through trade. But they did not know what was provided in exchange for the obsidian.

The researchers said the findings show developments in technology and social structures unexpected so early in human history.

Rick Potts is a paleoanthropologist and director of the Human Origins Program at the Smithsonian Institution's National Museum of Natural History in Washington D.C. He believes that these newly identified mental and social abilities — including recognition of "distant groups, use of pigments and technologies including projectile points — were at the foundation of our species' origin."

Alison Brooks, another paleoanthropologist, is with the George Washington University in Washington, D.C. Speaking of the pigment, she said, "The choice of importing the ochre from a distance rather than using a more common local material...argues that having a red face or hair or clothing or weapons also carried a symbolic message of some sort."

The researchers described the obsidian tools they found as smaller, of better quality, and more specialized than larger stone tools used by earlier human species.

The obsidian was used in a number of tools with sharp or pointy edges. The rock was also found in small, sharp points that could be placed at the end of a piece of wood or bone for use as a weapon.

Will Dunham reported this story for the Reuters news service. Jonathan Evans adapted his report for VOA Learning English. George Grow was the editor.

advanced – adj. being far along in progress or development

artifact – n. a simple object such as a tool or weapon that was made by people in the past

fossil – n. remains of an ancient organism that has been protected in Earth's surface

paleoanthropologist – n. the study of anthropology that deals with fossils

projectile – n. something that is thrown as a weapon