Update Required To play the media you will need to either update your browser to a recent version or update your Flash plugin.
By John Russell
18 April 2020


Scientists have recently discovered how to compute the age of whale sharks, Earth's largest fish.

Researchers used information about radioactivity levels from Cold War-era atomic bomb testing. They determined that bands form in the shark vertebrae every year, like a tree's growth rings. 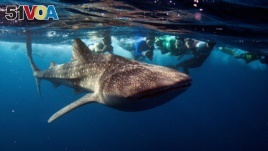 They reached their conclusion by measuring levels of carbon-14. The naturally occurring radioactive element is also a product of nuclear explosions.

It was already known that these bands existed and increased in number as sharks aged. But it was unclear whether new rings appeared yearly or every six months.

Joyce Ong is a marine scientist at Rutgers University in New Jersey. She was the lead author of the study that was published recently in the journal Frontiers in Marine Science.

"These elevated levels of carbon-14 first saturated the atmosphere, then oceans and moved through food webs into animals, producing elevated levels in structures such as the vertebrae of whale sharks," Ong said.

Whale sharks have a brownish-grayish color on the back and sides with white spots. The largest ones measure some 18 meters in length. They swim great distances through the world's tropical oceans to find food and feed on small organisms taken out of the water.

The discovery enables scientists to measure a whale shark's age after its death. But just as importantly, it shows that these endangered marine giants grow slowly.

Mark Meekan, a co-author, is with the Australian Institute of Marine Science in Perth. He said, "For the management of any marine species, knowledge of growth rate is critical as it determines the resilience of populations to threats such as fishing."

Meekan said, "We thought that it was possible that they could reach ages of as much as 100 years, but we weren't really sure..."

The researchers tested carbon-14 levels in long-dead whale sharks whose remains were stored in laboratories. The oldest one tested, stored in Pakistan, had lived 50 years.

vertebrae – n. one of the small bones that are linked together to form the backbone

data -- n. facts or information used usually to calculate, analyze, or plan something

atmospheric -- adj. of or relating to the atmosphere of the Earth or another planet

saturate – v. to fill (something) completeljy with something

resilience – n. the ability to become strong, healthy, or successful again after something bad happens