Update Required To play the media you will need to either update your browser to a recent version or update your Flash plugin.
By Pete Musto
09 September, 2018


British scientists have found how a substance in the cannabis plant acts in the brain to reduce abnormal activity in patients at risk of psychosis.

Their findings suggest that the substance could be used in a possible treatment for the condition.

Cannabis, also known as marijuana, is illegal to grow, sell or use in many countries. Using powerful forms of cannabis can increase a person's chances of developing psychosis. But the substance the researchers studied, the chemical cannabidiol, appears to have the opposite effect. 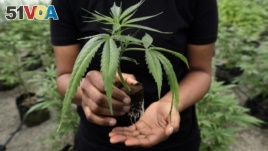 A young marijuana plant is held by Joy Hollingsworth, of the Hollingsworth Cannabis Company, Thursday, April 12, 2018, in one of the company's pot growing facilities near Shelton, Wash. (AP Photo/Ted S. Warren)

Cannabidiol, or CBD, is non-intoxicating. That means it is unlike drugs or alcoholic products, which can affect the user's judgement or behavior.

CBD is the same cannabis substance that has also been shown to help patients with epilepsy, a disorder of the nervous system. This led to the approval in the United States of a cannabis-based drug, a specially processed form of CBD, in June.

Earlier research at King's College London had shown that CBD seemed to block the effects of tetrahydrocannabinol, the intoxicating substance in cannabis. But how this happened was a mystery.

Now, King's College researchers say they have more evidence of the health benefits of CBD.

Sagnik Bhattacharyya and his team gave 33 young people capsules containing the substance. All 33 subjects were experiencing signs of psychosis, although they had not been shown to have the full-blown mental condition.

The researchers studied images from the brains of the young people. They found that taking CBD capsules reduced abnormal activity in three areas of the brain: the striatum, medial temporal cortex and midbrain.

Abnormal activity in all three areas has been linked to the development of psychotic disorders, such as schizophrenia.

Most current anti-psychotic drugs target the chemical dopamine. The brain uses dopamine to send signals from one nerve cell to another. But CBD works in a different way.

One major difference is that the body has an easier time dealing with CBD than other substances. CBD is less likely to cause harmful side effects, such as weight gain and other health problems linked to existing medicines.

Bhattacharyya told the Reuters news agency, "One of the reasons CBD is exciting is because it is very well tolerated compared to the other anti-psychotics we have available."

"There is an urgent need for a safe treatment for young people at risk of psychosis," he added.

The Institute of Psychiatry, Psychology and Neuroscience at King's College now plans a 300-patient clinical trial of CBD as a treatment.

Researchers plan to start identifying subjects for the clinical trial in early 2019.

The latest findings show the complexity of the combination of chemicals found within the marijuana plant. They come at a time when many countries are beginning to make their laws against cannabis less severe.

We want to hear from you. What other health benefits do you think scientists will discover in the cannabis plant? Write to us in the Comments Section or on 51VOA.COM.

abnormal – adj. unusual especially in a way that causes problems

psychosis – n. a very serious mental illness that makes you behave strangely or believe things that are not true

capsule(s) – n. a very small container that is filled with medicine and swallowed whole

full-blown – adj. having all of the qualities that are associated with a particular thing or type of person

side effect(s) – n. an often harmful and unwanted effect of a drug or chemical that occurs along with the desired effect

tolerate(d) – v. to experience something harmful or unpleasant without being harmed

clinical – adj. relating to or based on work done with real patients