Update Required To play the media you will need to either update your browser to a recent version or update your Flash plugin.
By Anne Ball
02 October, 2016


What covers nearly 29 million square kilometers of this planet beneath the sea?

The answer is seamounts.

Seamounts are mountains, usually volcanoes, that rise up from the sea floor. Some of the volcanoes are ancient, some are still active. But they are hard to find because they do not reach the surface of the water.

Scientists say seamounts cover more of the earth's area than deserts, tundra, or any other land-based habitats. Marine life gathers at seamounts because they carry nutrient-rich water upward from the sea floor. 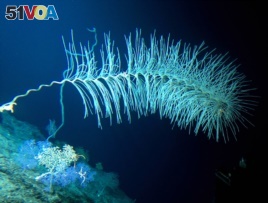 Deep sea coral sits at the top of the Cook seamount, seen from the Pisces V submersible during a diveoff the coast of Hawaii on Sept. 6, 2016. Seamounts are believed to cover about 29 million square kilometers of the planet. (AP Photo/Caleb Jones)

In September, a group of scientists set out to explore Cook Seamount. It rises almost 4,000 meters from the Pacific Ocean floor about 160 kilometers off the island of Hawaii. Humans have never seen it up close before.

The Associated Press went with the scientists, and provided exclusive images and information about this seamount and the marine life around it.

"Pisces V surface you're going in. Roger, going in." 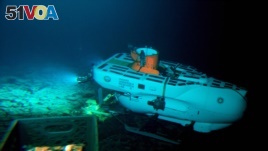 The Pisces IV submersible sits on top of Cook seamount, as seen from the Pisces V craft, during a dive to the previously unexplored underwater volcano off the coast of Hawaii's Big Island on Sept. 6, 2016. Seamounts are places scientists are finding new species. (AP Photo/Caleb Jones)

Three people went in a submarine down to over 900 meters below the ocean surface to the top of the seamount. As the blue waters became darker, underwater creatures that glow, by chemically creating their own light, began to swim past the submarine.

The scientists dove below the level where sunlight can reach.

They spotted some wonders-- like a rare octopus with big fins that look like elephant ears. One even changed colors as it swam by the submarine. A "Dumbo octopus" -- with fins like elephant ears-- swims toward the Pisces V submersible at the summit of the Cook seamount during a dive to the unexplored underwater volcano off Hawaii's Big Island on Sept. 6, 2016. (AP Photo/Caleb Jones)

Conservation International and the University of Hawaii worked together for the trip to Cook Seamount.

Greg Stone is the lead scientist with Conservation International. He spoke to AP news service on the ship.

"This three day expedition is the start of an effort to survey seamounts throughout the Pacific Ocean over the next five years. And we hope to study a total of 50 seamounts."

He said humans know very little about seamounts, but they are a "key part" of what drives the ocean. Stone said he wants to find out what is living on the seamounts and how they support ocean life. 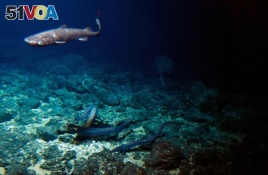 A deep sea shark and several eels come to food placed at the summit of the Cook seamount, seen from the Pisces V submersible during a dive to the unexplored seamount off the coast of Hawaii on Sept. 6, 2016. (AP Photo/Caleb Jones)

M. Sanjayan is Executive Vice President of Conservation International. He told AP that there are "10,000, maybe 100,000" seamounts across the world's oceans. He called them "hotspots for marine diversity," and because most have not been explored, he expects that they will see things new to science when they get there.

Sonia Rowley is a researcher at the University of Hawaii who is taking part in the project. She will be studying the samples taken from Cook seamount. "They were really magnificent actually, there were these huge structures that were going like tens of hundreds of meters high, and then on the edges they were kind of encrusted in many places with this beautiful purple Gorgonian sea fan."

Cook seamount is an extinct volcano, which means it is not active anymore. It is part of a group of undersea volcanoes known as the Geologist Seamounts, that are about 80 million years old and could hold many new animal species. They could also contain elements such as nickel and cobalt that mining companies could extract.

One of the other two seamounts studied on their trip was Lo'ihi, an active volcano.

Lo'Ihi has been studied by manned submersibles over the past 30 years.

The scientists saw an "old friend" on Lo'Ihi—a shark they had seen there before. They also saw a two-meter long eel and a number of new geological formations around the volcano's crater.

Scientists say Lo'ihi could someday be the newest island in the Hawaii chain as volcanic activity pushes the seamount upward. But do not look for it to break the surface of the water any time soon. Estimates are that it will not be for tens of thousands of years, if ever.

We want to hear from you. Write to us in the Comments Section, and find us on 51VOA.COM.

exclusive –adj. not available anywhere else

habitat –n. a kind of place where certain kinds of animals and plants live and grow

marine –adj. having to do with the sea

virtually –adv. through digital technology rather than physically

crater –n. a round hole at the top of a volcano or caused by the impact of a meteorite