Update Required To play the media you will need to either update your browser to a recent version or update your Flash plugin.
By Bryan Lynn
02 October 2021


Researchers in Uganda have discovered evidence of a drug-resistant form of malaria.

Health officials fear the finding could make the top drug used against the disease useless if the resistant form keeps spreading. 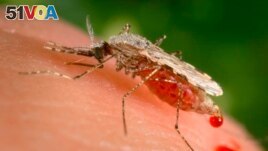 Scientists in Uganda examined blood samples from patients treated with artemesinin, the main medicine used for malaria in Africa in combination with other drugs.

They found that by 2019, nearly 20 percent of the samples had genetic changes suggesting the treatment was ineffective. Lab tests showed it took much longer for those patients to get rid of the organisms that cause malaria.

"Our findings suggest a potential risk of cross-border spread across Africa," the researchers wrote in a study recently published in the New England Journal of Medicine.

The scientists examined 240 blood samples over a three-year period. They found evidence that the drug-resistant forms first appeared in Uganda rather than being imported from elsewhere.

Malaria is spread by mosquito bites and kills more than 400,000 people every year. Most of the victims are children under age 5 and pregnant women.

Dr. Philip Rosenthal is a professor of medicine at the University of California, San Francisco. He told The Associated Press that the new findings in Uganda -- following the past results in Rwanda -- "prove that resistance really now has a foothold in Africa."

Rosenthal, who was not involved in the new study, said there is likely undiscovered drug resistance elsewhere on the continent. He said drug-resistant versions of malaria appeared in Cambodia years ago and have now spread across Asia. He predicted a similar path for the disease in Africa, with possibly deadlier results because of the heavy presence of malaria in Africa.

Dr. Nicholas White is a professor of medicine at Mahidol University in Bangkok, Thailand. He wrote a commentary on the results that appeared with the study. He described the findings about a drug resistant malaria as "unequivocal."

Based on the results, White suggested a change in the treatment method for malaria. He said that instead of combining artemisinin with one or two other drugs, doctors should now use three. This same method is often used to treat tuberculosis and HIV.

White urged public health officials to take steps now to reduce the spread of drug-resistant malaria. Among other measures, he suggested increased monitoring and support for research into new drugs.

"We shouldn't wait until the fire is burning to do something," he said. But, he added: "That is not what generally happens in global health." As an example, he pointed to recent failures to stop the worldwide spread of COVID-19.

The Associated Press reported this story. Bryan Lynn adapted the report for VOA Learning English. Susan Shand was the editor.

mosquito – n. a small flying insect that feeds of the blood of people and animals

foothold – n. a safe position from which you can make more progress

monitor – v. to watch something carefully and record the results