Update Required To play the media you will need to either update your browser to a recent version or update your Flash plugin.
By Bryan Lynn
07 August 2022


Researchers say they have discovered evidence of the oldest dark matter ever observed in the universe.

Dark matter remains mysterious. Scientists believe the material makes up more than one quarter of the universe. But it cannot be directly seen or felt.

Astronomers have theorized that dark matter exists because of gravity's observed effects on galaxies. They believe dark matter provides a kind of protective barrier that prevents galaxies from coming apart. 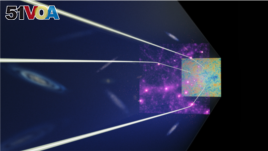 This illustration envisions the process researchers from Japan and the United States used to discover dark matter from distant galaxies in the universe. The scientists used cosmic microwave background (CMB) radiation left over from the Big Bang to reveal

Scientists report in a new study that they used satellite and telescope equipment to collect data that led them to observe dark matter as it existed 12 billion years ago. That is not long after the Big Bang, which is believed to have happened about 13.8 billion years ago. The Big Bang is the explosion that many scientists believe created the universe.

The research team was led by scientists from Japan's Nagoya University. It also included researchers from the University of Tokyo, the National Astronomical Observatory of Japan and America's Princeton University.

When spacecraft, telescopes and other equipment observe distant galaxies, they are seeing them as they existed in the past. This is because of the amount of time it takes for light to travel. So in some cases, the observations involve events that happened millions or billions of years ago.

Since dark matter does not give off light, it is very difficult to observe. To do so, scientists look at how the material reacts to gravitational forces.

One method for this is called gravitational lensing. This involves observing how the gravity of large collections of galaxies bend and distort the light of more distant galaxies that sit behind the galaxy group, the American space agency NASA explains.

While gravitational lensing is one way to measure amounts of dark matter, the method is more difficult when trying to observe the material in the most distant parts of the universe. The farther the galaxy, the more difficult it is to observe bending and distortion of light.

So the researchers involved in the new study used another method to observe distant dark matter. They decided to use a different source for background light. This source is known as the Cosmic Microwave Background (CMB). The CMB is leftover radiation from the Big Bang and serves as the main source of information about the early universe.

The team first used data from observations made by an instrument called the Subaru Hyper Suprime-Cam Survey, which operates at the Subaru Telescope in Hawaii. With this data, the researchers said they were able to identify 1.5 million galaxies seen by faintly observed light from 12 billion years ago.

Then, the scientists used another method to search for dark matter even further away. They used cosmic microwaves observed by the European Space Agency's Plank satellite to measure how dark matter around distant galaxies distorted the microwaves.

Yuichi Harikane is an assistant professor at the University of Tokyo's Institute for Cosmic Ray Research. He helped lead the research, recently published in Physical Review Letters.

University of Tokyo professor Masami Ouchi led many of the new observations. He said that the idea to look for dark matter in distant galaxies was completely new before the team began the project. "Look at dark matter around distant galaxies? It was a crazy idea. No one realized we could do this," Ouchi said.

Nagoya University professor Hironao Miyatake said he was happy the researchers were able to "open a new window" into such a distant time. "Twelve billion years ago, things were very different. You see more galaxies that are in the process of formation than at the present. The first galaxy clusters are starting to form as well," Miyatake said.

Bryan Lynn wrote this story for VOA Learning English, based on reports from the University of Tokyo, the National Astronomical Observatory of Japan, Nagoya University and Princeton University.

distort – v. to change the shape, sound or appearance of something

source – n. the place where something comes from or starts at

faint – adj. not strong or clear

distribute – v. to give out or spread something

cluster – n. a collection of stars or galaxies that appear close together in the sky and are gravitationally linked.