Update Required To play the media you will need to either update your browser to a recent version or update your Flash plugin.
By VOA
18 August, 2019


Scientists say they have found high levels of small plastic particles in Arctic snow. Their findings provide more evidence that plastic is entering Earth's atmosphere and traveling great distances around the planet.

A new report describing the discovery was published in Science Advances.

A German-Swiss research team collected snow samples from the Arctic and other areas. They included northern Germany, the Bavarian and Swiss Alps, and the North Sea island of Heligoland.

When the researchers examined the samples in a laboratory, they were surprised to find very high levels of microplastics.

Microplastics are very small pieces of plastic. These plastic particles are generally smaller than 5 millimeters in length. Other studies have found microplastics in the environment. They come from the disposal and breakdown of man-made plastic products and industrial waste. 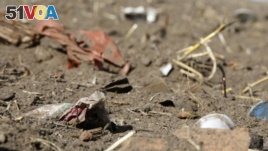 Melanie Bergmann co-wrote the report on the new study. She told The Associated Press that while her team did expect to find some microplastics in the samples, they were surprised by the very large amounts.

Bergmann is a researcher at the Alfred-Wegener-Institute in the German city of Bremerhaven.

Earlier studies found signs of plastic in Arctic areas. Those microplastics were found in coastal areas, sea ice, the seafloor and the seawater's surface.

The new study attempted to explore how some of the material could have been carried in the atmosphere. A limited number of earlier studies did find microplastics in the air of some cities, including Paris, Tehran and Dongguan, China.

Bergmann said in a statement she believes the new study clearly shows that "the majority of the microplastic in the snow comes from the air." She said this idea is supported by research that studied the atmospheric movement of pollen from plants. In those studies, scientists confirmed pollen had traveled great distances to reach the Arctic.

Other studies found that dust particles – which are similar to microplastics - traveled more than 3,500 kilometers from the Sahara Desert to the northeast Atlantic.

Bergmann said the new study suggests that much of the microplastic found in Europe and the Arctic comes from the atmosphere and snow. "This additional transport route could also explain the high amounts of microplastic that we've found in the Arctic sea ice and the deep sea in previous studies," she said.

The research team discovered many kinds of microplastics. Some were from paints commonly used to coat the surface of automobiles and ships. A rubber-like substance was also found that could have come from vehicle or boat parts or packaging materials, the report said.

While there is growing concern about the effect of microplastics on the environment, scientists are still studying their possible harmful effects on humans and animals.

Bergmann said she hopes the new study will lead to more research on this issue. She also said she believes that microscopic plastic particles should be included in worldwide observations of air pollution levels.

"We really need to know what effects microplastics have on humans, especially if inhaled with the air that we breathe," Bergmann said.

Bryan Lynn wrote this story for VOA Learning English, based on reports from the Associated Press, Reuters, Science Advances and the Alfred-Wegener-Institute. George Grow was the editor.

sample – n. a small piece or piece meant to show what the whole being or object is like;

disposal – n. the act of getting rid of something

route – n. the path followed to get from one place to another

packaging – n. t e paper, box, etc. something is kept in so it can be sold or sent somewhere

inhale – v. to breathe in