Update Required To play the media you will need to either update your browser to a recent version or update your Flash plugin.
By John Russell
07 June 2020


Scientists have discovered the largest and oldest-known structure that was built by the ancient Mayan people.

Large and shaped like a rectangle, the structure was built between 2,800 and 3,000 years ago in what is now the Mexican state of Tabasco.

Unlike the large Mayan pyramids built some 1,500 years later, the newly discovered building was made with clay and earth. It was likely used for ceremonies, researchers say.

Built near the Guatemalan border, the structure measured nearly 400 meters wide and nearly 1,400 meters long. It stood between 10 and 15 meters high. It had more volume -- the amount of space -- than Egypt's Great Pyramid of Giza.

Researchers noted that there were no signs of statues of powerful or wealthy people. This suggests Mayan culture may have had more equality during this period.

Takeshi Inomata, an archaeologist at the University of Arizona, led the research. The findings were published in the scientific journal Nature.

Inomata said that because the structure is so large, "it just looks like natural landscape. But its form comes out nicely in lidar," he added.

Lidar is short for Light Detection and Ranging, a method for measuring distances. It uses a laser and other information collected by flying over an area to create three-dimensional information about a surface's shape. 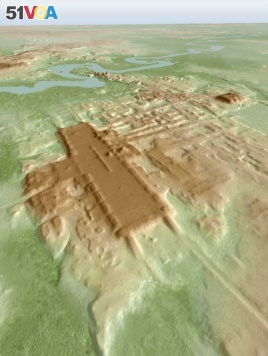 A three-dimensional image of the ancient Maya Aguada Fenix site in Mexico's Tabasco state based on lidar, an aerial remote-sensing method, is seen in this picture released on June 3, 2020. (Takeshi Inomata/Handout via REUTERS)

Some parts of the site are currently covered with cattle ranches. Other parts have trees.

But in ancient times, Inomata said, the structure was likely used for special events. People probably walked on raised paths and inside the rectangular structure. He said they left symbolic objects behind, such as jade axes.

Will Dunham reported on this story for the Reuters news agency. John Russell adapted it for VOA Learning English. George Grow was the editor.

rectangle – n. an object with four straight sides and four right angles, and opposite sides are of equal length

pyramid – n. a large structure built especially in ancient Egypt that has a square base and four triangular sides which form a point at the top

ranch – n. a large farm where cattle or other animals are raised

axe – n. a tool that usually has a heavy metal blade and a long handle and that is used for chopping wood