Update Required To play the media you will need to either update your browser to a recent version or update your Flash plugin.
By Susan Shand
02 February 2022


The highly infectious Omicron variant of coronavirus is known as BA.1. It is the cause of nearly all of the new coronavirus infections worldwide. Cases, however, seem to be decreasing in some countries.

But scientists are now following a rise in cases caused by the closely related BA.2. It is being called a sub-variant of Omicron. It is starting to overtake BA.1 in parts of Europe and Asia.

A sub-variant of the new coronavirus 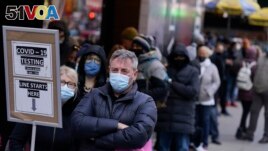 Worldwide, BA.1 has been linked to more than 98 percent of cases that had genomes sequenced, reported GISAID on January 25. GISAID is an international science organization that studies and releases scientific information about viruses.

But several countries are reporting increases in the sub-variant known as BA.2, the World Health Organization (WHO) reported. BA.2 does not cause more severe illness than BA.1, the WHO also said.

In addition to BA.1 and BA.2, the WHO lists two other Omicron sub-variants BA.1.1.529 and BA.3. All are closely related genetically. But each has a mutation that could affect how it behaves.

Trevor Bedford is a virologist at Fred Hutchinson Cancer Center in Seattle, Washington. He has been studying the variants of the new coronavirus.

He wrote on Twitter recently that BA.2 makes up about 82 percent of cases in Denmark, 9 percent of the cases in Britain and 8 percent in the United States. These percentages come from his examination of the genome sequencing information provided by GISAID as well as information from the University of Oxford.

BA.2 is sometimes called a "stealth" sub-variant. It does not have the same missing gene. Instead, scientists are following it the same way they have followed earlier variants, including Delta. They do this by counting the number of virus genomes given to organizations such as GISAID.

As with other variants, an infection with BA.2 can be confirmed by using coronavirus home tests. Experts, however, have said that the home tests cannot identify which variant is responsible for an infection.

A Danish study reports that BA.2 is more infectious than BA.1, and is able to infect those who are vaccinated, but it does not cause more severe illness.

In England, the UK Health Security Agency studied contact information for people infected with COVID-19 from December 27, 2021, through January 11, 2022. The Agency suggested that transmission within homes is a little higher among people infected with BA.2. That rate was around 13 percent. With Omicron cases the infection rate was 10 percent. There appears to be no difference in vaccine effectiveness.

The important question is whether people who were infected with the BA.1 will be protected from BA.2, said Dr. Egon Ozer. He is an infectious disease expert at Northwestern University Feinberg School of Medicine in Chicago.

In Denmark, some places that had a high number of cases of BA.1 were reporting rising cases of BA.2, Ozer said.

If BA.1 infection does not protect against BA.2, it could create another round of infections.

"It's too early to know if that will happen," Ozer said.

The good news, he said, is that vaccines and booster shots still "keep people out of the hospital and keep people from dying."

sequence – v. to find out the order of chemical substances (such as amino-acids in DNA)

mutation –n. a change in the genes of a plant or animal that causes a different quality to be recognized

virologist – n. a scientist who studies viruses and the diseases they cause

stealth – adj. a secret, quiet, and clever way of moving or behaving

transmission – n. the act or process by which something (in this case, a virus) is spread or passed from one person or thing to another

booster shot – n. an extra amount of a vaccine that is injected into a person or animal to help protect against a disease