Update Required To play the media you will need to either update your browser to a recent version or update your Flash plugin.
By Anna Matteo
25 December 2022


Scientists working on Australia's Great Barrier Reef have successfully tested a new method for freezing and storing coral larvae. Larvae are the very young form of the small ocean animal.

Coral creates reefs, structures in the ocean that support entire ecosystems. However, climate change is threatening the existence of such reefs.

The science project in Australia involves freezing and storing coral larvae to use later for rewilding. A new material called "cryomesh" is helping the scientists in the effort. 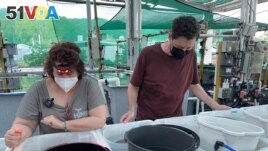 Coral is frozen using a special method called cryogenics. This permits the young animals to be stored until they can be unfrozen and placed in the wild.

The process currently requires high-tech equipment including lasers and is costly. But, the team in Australia says cryomesh can do a better job of saving the coral and for much less money.

The scientists used the cryomesh to freeze Great Barrier Reef coral larvae at the Australian Institute of Marine Sciences, or AIMS. Workers collected the coral during the animal's brief yearly reproductive period.

Mary Hagedorn is Senior Research Scientist at Smithsonian National Zoo and Conservation Biology Institute. She spoke with Reuters from the AIMS laboratory.

She explained, "If we can secure the biodiversity of coral ... then we'll have tools for the future to really help restore the reefs." She added, "...this technology for coral reefs in the future is a real game-changer."

The cryomesh had been tested earlier on smaller and larger kinds of Hawaiian corals. A test on the larger failed.

The tests involved scientists from several organizations, including AIMS, the Smithsonian National Zoo and Conservation Biology Institute, the Great Barrier Reef Foundation, and the Taronga Conservation Society Australia. Together they are part of the Reef Restoration and Adaptation Program.

The mesh technology helps to store coral larvae at -196 degrees Celsius. The University of Minnesota College of Science and Engineering developed the material.

The Great Barrier Reef has suffered four bleaching events in the last seven years. This includes the first ever bleach during a La Nina weather event, which usually bring cooler temperatures.

Coral bleaching happens when extreme temperatures and sunlight force corals to release algae living in their tissue. This causes them to lose their color and turn white. The experience greatly weakens the coral and can kill them.

larvae – n. an early form of any animal that at birth or hatching is very different from its parents

biodiversity – n. the variety of life in the world or in a particular habitat or ecosystem

game-changer – n. a newly introduced element or factor that changes an existing situation or activity in a significant way

algae – n. any plant or plantlike organism (as a seaweed) that includes forms mostly growing in water, lacking a system of vessels for carrying fluids, and often having chlorophyll masked by brown or red coloring matter