Update Required To play the media you will need to either update your browser to a recent version or update your Flash plugin.
By John Russell
16 May 2022


For the first time, scientists have grown plants in moon soil collected by NASA's Apollo astronauts.

The scientists had no idea if anything would grow in the moon dirt. They wanted to see if it could be used to grow food by the next generation of moon explorers. The results surprised them.

Robert Ferl of the University of Florida's Institute of Food and Agricultural Sciences was surprised with the results. "Plants actually grow in lunar stuff. Are you kidding me?" he said. 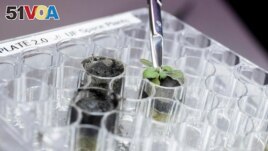 In this 2021 photo provided by the University of Florida, Institute of Food and Agricultural Sciences, a researcher harvests a thale cress plant growing in lunar soil, at a laboratory in Gainesville, Fla. (Tyler Jones/UF/IFAS via AP)

Ferl and other researchers planted thale cress, a small flowering plant, in moon soil returned from the Apollo missions. The good news was that all of the seeds grew.

The bad news was that after the first week, the lunar soil stressed the plants so much that they grew slowly. Most of the moon plants ended up stunted – meaning small or not fully developed.

Results of the study appeared recently in the publication Communications Biology.

The longer the soil was exposed to radiation and solar wind on the moon, the worse the plants seemed to do. The soil collected by the Apollo 11 mission was the least helpful for growth. It was exposed a couple billion years longer to the elements, the scientists said.

Simon Gilroy of the University of Wisconsin-Madison was not part of the study. He said, "This is a big step forward to know that you can grow plants." Gilroy added, "The real next step is to go and do it on the surface of the moon."

Moon dirt is full of glass particles from micrometeorite impacts. These particles got in the Apollo lunar landers and wore down the moonwalkers' spacesuits.

One solution might be to use younger geologic spots on the moon, like lava flows, for digging up soil. The environment also could be changed by adding special nutrient mixtures or artificial lighting.

Only 382 kilograms of moon rocks and soil were brought back by the six Apollo crews that landed on the moon. Most of them are still locked away, forcing researchers to experiment with soil made of volcanic ash on Earth.

Early last year, NASA finally gave out 12 grams of soil to the University of Florida researchers for the planting experiment. NASA said the timing for such an experiment was finally right, with the space agency looking to put astronauts back on the moon in a few years.

The best situation would be for future astronauts to use local dirt for indoor planting instead of setting up a hydroponic, or all-water, system, scientists said.

Sharmila Bhattacharya is NASA's program scientist for space biology. Bhattacharya used the term optimize – meaning to make something as good or as effective as possible – to describe the work that lies ahead.

She said, "The fact that anything grew means that we have a really good starting point, and now the question is how do we optimize and improve."

The Florida scientists hope to reuse their lunar soil later this year, planting more thale cress before possibly moving on to other plants.

Marcia Dunn reported on this story for the Associated Press. John Russell adapted it for VOA Learning English.

micrometeorite -- n. a meteorite so small that it can pass through the earth's atmosphere without becoming intensely heated; a very small particle in interplanetary space