Update Required To play the media you will need to either update your browser to a recent version or update your Flash plugin.
By Mario Ritter Jr.
22 August, 2019


Scientists are working to stop a deadly virus that infects pigs.

The virus is causing huge losses for farmers in China and other Asian countries.

Many farmers have tried to contain African swine flu by quarantining pigs and destroying infected animals. But the spread of the disease into East Asia has intensified the search for other ways to deal with the problem.

The virus had not been considered a major concern for researchers until it appeared in China last year. Chinese farmers raise about half of the world's pigs. Some researchers think the virus might have come from infected animals in Eastern Europe or Russia.

Since then, it has spread to China, Vietnam and other Asian countries. Millions of pigs have been destroyed.

Although swine flu does not sicken people, it is very contagious and deadly to pigs.

A ‘global threat' to a big industry

"Today's situation, where you have this global threat, puts a lot more emphasis on this research," said Doctor Luis Rodriguez. He spoke to The Associated Press. 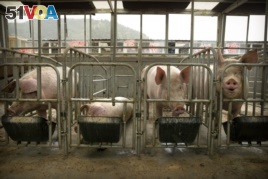 In this May 8, 2019, photo, pigs eat feed at a pig farm in Panggezhuang village in northern China's Hebei province. As a deadly virus ravages pig herds across Asia, scientists are accelerating efforts to develop a vaccine.

Vaccines often are developed by killing a virus before it is injected into an animal. The disabled virus does not make the animal sick, but it activates the body's natural defenses against disease. The immune system is then able to identify the virus and produce antibodies against it.

However, this method is not effective with all viruses including the one that causes African swine flu.

For swine flu, scientists have been working on a different kind of vaccine. It is made from a weakened virus, not a dead one. The problem for researchers has been how to change the virus so it can be safely used.

Vietnam's government reported a few weeks ago that it was testing vaccines, but provided few details of its programs.

In China, the government said scientists are working on a vaccine that genetically changes the virus. That is similar to a method being used by scientists in the United States.

The U.S. Department of Agriculture said it recently signed an agreement with a vaccine manufacturer to study and develop one of three possible vaccines from the Plum Island center. All the experimental vaccines use genetically changed viruses which have some of the genes removed.

But the vaccine finally chosen by researchers needs to be tested in large numbers of pigs before it is ready for approval.

Linda Dixon is a biologist at Britain's Pirbright Institute, which studies diseases in farm animals. She said the testing can take from two to five years.

Even if vaccines become available, it is not clear if they will work everywhere. For example, vaccines developed for the virus in China and Europe may not work in African countries south of the Sahara desert, where the disease has existed much longer.

Daniel Rock once led Plum Island's African swine flu program. He suggested that some areas might have more success against the disease by killing sick animals.

But Rock noted that the disease's huge outbreaks around the world have made developing a vaccine an important goal for U.S. researchers.

Sam McNeil and Candice Choi reported this story for The Associated Press. Mario Ritter Jr. adapted it for VOA Learning English. George Grow was the editor.

quarantine – v. to remove or separate from other people or animals

contagious – adj. spreading from one person or organism to another

emphasis – n. special importance or attention given to some matter

immune system – n. the system that protects the body from diseases and infections

antibodies – n. substances produced by the body that fight disease