Scientists in Spain Look to Old Vines to Save Wine Business

Update Required To play the media you will need to either update your browser to a recent version or update your Flash plugin.
By Dan Friedell
13 November 2022


Genetic researchers in Spain's wine country believe grape vines that have lived for more than 35 years are better able to deal with high temperatures brought by climate change.

Winemakers in the Rioja area in northern Spain make some of the best wine in the world. Wine has been made there for hundreds of years.

But in recent years, winemakers there have been having trouble producing good wine. They say the wine tasted better in the past, when temperatures were usually cooler. The 2022 summer was the hottest in Spain since record-keeping began in 1961. Temperatures were 2.2 degrees Celsius higher than average. 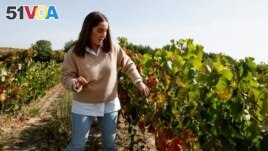 Researchers like Pablo Carbonell think older grapevines may be able to grow better in higher temperatures.

As part of his research work, Carbonell looks at rows of gray shapes on his computer screen. Among them was a green rectangle. This, he said, represents a kind of grapevine that produces grapes that take longer to ripen, even in warmer conditions.

A longer ripeness period is what winemakers want. The current vines produce grapes that are ready to pick too early. Such grapes do not make wine that has the right color and smell. The wine also has too much alcohol.

People who work in the vineyards have long crossed old vines with new ones. Now they are working with special laboratories -- like the one where Carbonell works -- to find a climate-resistant vine.

The place is called the Vine and Wine Research Institute. It is known as the ICVV in Spain. The scientists there are studying the genomes of commonly used grapes in Spanish wine.

The lab is working to keep the Spanish winemaking industry alive as temperatures rise. The scientists say the older grapevines have a more diverse genetic makeup.

Spain is the third-largest winemaking country in the world behind France and Italy. Spanish wine production is worth close to $5 billion in the country's economy each year.

The United Nations warns that climate change will cause Europe to lose crops due to heat, dry conditions and "extreme weather." The report will be included in the discussion at the COP 27 international climate meeting, which began this week in Egypt and runs until November 18.

Inigo Torres is director of Grupo Rioja, a trade association representing 60 wineries in the region.

"We are very worried about climate change," he said. He noted that this year's grape harvest started two weeks early. The change affects the way the wine tastes.

Torres said the warmer weather also limits how many grapes grow on each vine. As a result, total wine production has gone down by 5 to 10 percent over the last four years.

Jose Miguel Martinez Zapater is the director of ICVV. He and his scientists are working to analyze the wine. They are looking at vine cuttings that are close to 100 years old.

He said the laboratory is doing the same kind of work scientists have done to sequence the human genome. But instead of looking for mutations that cause diseases, the wine scientists are looking for traits, or qualities, that might permit the vines to survive in a warmer climate.

In addition to the genetic research, scientists are also working on different planting methods. A winery called RODA is planting vines in a curve instead of a straight line. The hope is that plants will soak up more water this way. The new vineyard is made up of vines that were over 100 years old and moved from another place.

Maria Santolaya is an agricultural engineer and part of RODA's technical team. She said she hopes next summer is not as hot. The hot weather, she said, "has been very problematic."

But, "our biggest concern," she added, "is what will happen in 20 or 30 years. We don't really know how things will come out."

screen –n. the flat part of a television or computer monitor

genome –n. the complete set of cells or genetic material in a living thing

diverse –adj. made up of things that are different from each other

region –n. a part of a country that is different from other parts

analyze –v. to study something carefully

mutation –n. a change in the genes of a plant or animal that causes physical characteristics different from what is normal