Update Required To play the media you will need to either update your browser to a recent version or update your Flash plugin.
By Bryan Lynn
31 January, 2019


Scientists are preparing to lead the first-ever major exploration operation in the Indian Ocean.

The exploration team is currently in Germany's northern city of Bremerhaven. The scientists are loading equipment onto a large supply ship and making other final preparations.

The effort, called the Nekton Mission, is expected to include a series of Indian Ocean expeditions over a three-year period. It will officially begin in the island nation of Seychelles in March. More than 40 organizations are supporting the exploration.

The Indian Ocean is the third-largest ocean in the world. Yet it is still one of the largest masses in the world that remains unexplored.

Findings from the Nekton Mission could affect up to 2.5 billion people living in Indian Ocean areas for many years to come. The research will be a major part of discussions at a meeting on the state of the Indian Ocean, which is set for late 2021.

The team plans to complete at least 50 exploration dives in the Seychelles before moving on to other areas. Researchers will spend seven weeks mapping the sea floor in waters around the Seychelles. They will use submarines to gather data about underwater life and drop sensors to depths up to 2,000 meters.

They will be using many new technological tools. These will include new survey, sampling and video equipment, as well as artificial intelligence and controllable underwater vehicles.

The project's goal is to learn as much as possible about the Indian Ocean's ecosystem and how sea life has been affected by climate change. Currently, little is known about the waters below depths of 30 meters.

Mission officials say scientific leaders have called for enforced protection of at least 30 percent of the Indian Ocean by 2030. The Seychelles government has set a goal to protect 30 percent of its national waters by 2020. 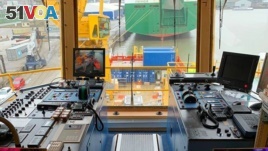 Ronny Jumeau is the Seychelles' ambassador to the United Nations. He told the Associated Press such research is extremely important in helping the island nation understand its huge ocean territory.

Jumeau said the Seychelles aims to become a leader in the development of what he calls a "blue economy." This is an economy that draws heavily on resources from the ocean. The Seychelles economy is already highly dependent on fishing and tourism. But more recently, the country began exploring possible oil and gas resources under the sea floor.

"Key to this is knowing not only what you have in the ocean around you, but where it is and what its value is," Jumeau said. "It is only when you know this that you can properly decide what to exploit and what to protect and leave untouched."

The island nation is already feeling the effects of climate change. One example is that rising water temperatures have caused major damage to coral reefs in the area.

expedition – n. group of people who travel together to a distant place

survey – n. examination of an area in which its measurements and details are recorded

properly – n. correctly, or in a satisfactory way

draw on - phrasal verb. to use (something) as a source or supply

exploit – v. use someone in a way that helps you unfairly

coral reef – n. long line of coral that lies in warm, shallow water (coral: a hard material formed on the bottom of the sea by the skeletons of small creatures)