Scientists Listen to Coral to Learn About Its Health

Update Required To play the media you will need to either update your browser to a recent version or update your Flash plugin.
By Dan Novak
09 June 2022


An international team of scientists is using artificial intelligence, or AI, to study the underwater sounds made by coral to learn more about the sea creatures.

The team of scientists listened to underwater sound recordings taken off islands in central Indonesia to learn. 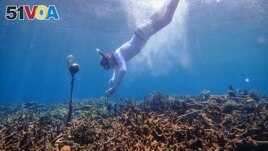 They found coral reefs make many sounds and are full of animal and plant life. Scientists from British and Indonesian universities published their findings last month in Ecological Indicators.

The researchers used hundreds of sound recordings to train a computer program to track the health of a coral reef by listening to it.

A healthy reef has a complex "crackling, campfire-like" sound. That is because of all the creatures living on and in it. The team's lead researcher, Ben Williams, said an unhealthy reef sounds desolate.

The AI system gathers data like the frequency and loudness of sounds in the recordings. From that information, the AI system can find out about 92 percent of the time whether a reef is healthy or unhealthy, the study said.

The scientists hope the AI system will help conservation groups around the world track the health of coral reefs.

The researchers also hope to collect underwater recordings from reefs in Australia, Mexico and the Virgin Islands to help track the progress of projects to rebuild coral.

Scientists say coral reefs are being damaged by carbon gas emissions. They say heat-trapping carbon gasses are warming ocean surfaces by .13 degrees every 10 years. They also say ocean acidity has increased 30 percent since the beginning of the industrial era. The Global Coral Reef Monitoring Network, a United Nations supported group, says 14 percent of coral around the world was lost between 2009 and 2018.

Coral reefs cover less than 1 percent of the ocean floor. But they support more than 25 percent of marine life, including turtles, fish and lobster. Coral reefs are very important to the fishing industry.

track— v. to follow something to find out more about it

frequency — n. the number of times a sound or radio wave is repeated in a period of time

conservation— n. the protection of animals, plants and natural resources

era — n. a period of time that is linked to a particular event