Update Required To play the media you will need to either update your browser to a recent version or update your Flash plugin.
By Ashley Thompson
01 December, 2014


Scientists know where earthquakes are likely to take place. But it is difficult for them to predict how strong an earthquake will be. Now, American researchers have found that it may be possible to predict the strength of future quakes.

The Earth's crust – the outermost surface – is made up of large tectonic plates. As many as 20 tectonic plates cover the Earth. They move slowly, sometimes sliding under one another. Where that happens, earthquakes can take place.

Timothy H. Dixon is with the University of South Florida. He is a geologist -- a scientist who studies rocks and soil to understand the Earth. He and other scientists are using global positioning system, or GPS, equipment to measure what he calls "slow-slip" events. By that, he means slow-moving earthquakes that cannot be measured by other instruments. 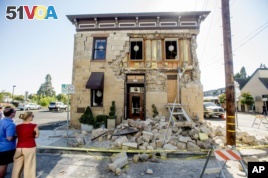 Timothy Dixon says that while such movements may not be felt, they can lead to large, sometimes deadly earthquakes.

"They're the kind of earthquake that made the big Japan earthquake in 2011 and the Sumatra earthquake and tsunami in 2004. So they can be, they can be the real killers. So what we think these slow-slip events are telling us is, they're letting off steam, so to speak, in areas of the fault. And if they let off enough steam, that part of the fault won't rupture."

The more of the fault that ruptures, or breaks, he says, the more powerful the earthquake is.

The scientists set up a number of GPS receivers 15 years ago in Costa Rica to measure the "slow-slip" events, which take place only every year or two. The last one was three months before an earthquake in 2012.

People always want to know when an earthquake is going to happen. This technology cannot predict that. But Timothy Dixon says knowing how strong the quake might be gives officials time to improve building codes and make other preparations.

A scientific paper presenting his findings was published in the Proceedings of the National Academy of Sciences.

fault – n. a break in the Earth's crust

receiver – n. radio or television equipment that changes signals into sound and pictures

code – n. a series of laws or regulations

inevitable – adj. sure to happen