Update Required To play the media you will need to either update your browser to a recent version or update your Flash plugin.
By John Russell
27 April 2022

The breeding was part of a project that hopes to restore damaged reefs off the coast of Florida.

Coral reefs in Florida and the Caribbean Sea are being affected by stony coral tissue loss disease. The disease causes coral to lose its color and die after a period of time. 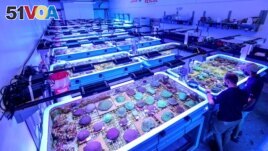 A view of corals in tanks at the Florida Coral Rescue Center in this undated handout photo released by Seaworld. ( Seaworld/Handout via REUTERS )

The Florida Coral Rescue Center is in part funded by the Disney Conservation Fund and Fish & Wildlife Foundation of Florida. It has bred hundreds of new rough cactus coral in recent weeks. The breeding center holds a total of 18 Florida coral species that are threatened.

Stony coral tissue loss disease was first observed near Miami in 2014. By 2017, it had spread to Florida's northernmost reef and, later, past Key West to the south.

That is deadlier for coral reefs than coral bleaching – a better-known event that is usually caused by higher water temperatures.

The Global Coral Reef Monitoring Network, or GCRMN, is supported by the United Nations and gathers information on coral reefs. The group said in October that 14 percent of the world's coral was lost between 2009 and 2018.

Brian Ellsworth and Julio-Cesar Chavez reported on this story for Reuters. John Russell adapted it for VOA Learning English.

coral – adj. a hard material formed on the bottom of the sea by the skeletons of small creatures

reef – n. a long line of coral that lies in warm, shallow water