Update Required To play the media you will need to either update your browser to a recent version or update your Flash plugin.
By Bryan Lynn
10 April, 2019


An international team of astronomers announced Wednesday it had successfully captured the first-ever image of a black hole.

The image was released during a press event at the National Science Foundation in Washington, D.C. Press events were also held in several other world cities.

The picture shows the black hole having a dark center, encircled by a bright orange and yellow ring spreading outward. The image is very similar to numerous artists' drawings through the years of what scientists believed a black hole looked like.

Black holes are areas in space where gravity is so strong that nothing – not even light – can escape them. They are believed to be formed by collapsed stars. The presence of black holes affects the surrounding environment in extreme ways.

Black holes are not easy to capture on camera because they are surrounded by thick dust material and extremely hot gases. 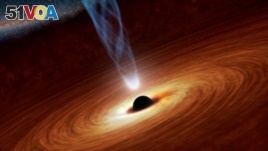 A supermassive black hole with millions to billions times the mass of our sun is seen in an undated NASA artist's concept illustration.

But scientists say they were able to produce the new image from data collected from a series of radio telescopes around the world. The telescopes are part of the international Event Horizon Telescope (EHT) project.

"We are delighted to be able to report to you today that we have seen what we thought was unseeable. We have seen and taken a picture of a black hole. Here it is."

Doeleman explained that the image resulted from a combined effort involving all eight of the EHT radio telescopes working at the same time. Over several days in April 2017, each piece of equipment centered on a galaxy 55 million light years away from Earth.

The galaxy is called Messier 87, or M87. At the center of the galaxy is a supermassive black hole. The new image shows this black hole. It has a mass 6.5 billion times greater than Earth's sun.

Researchers said in a statement that the EHT project created an Earth-sized "virtual telescope" to capture the highest possible image quality. The effort involved years of international cooperation by hundreds of researchers seeking to understand "the most extreme objects in the Universe."

Dimitrios Psaltis is an EHT project scientist from the University of Arizona in Tucson. He said the new picture provides strong evidence to support Albert Einstein's theories relating to the laws of gravity.

"The size and shape of the shadow matches the precise predictions of Einstein's general theory of relativity, increasing our confidence in this century-old theory," Psaltis said.

Sheperd Doeleman said the new image provides the first visual evidence to confirm that theory. It also helps to unlock the mystery of black holes. He added that he felt very satisfied that the image did not contain any big surprises.

Even though the data was first gathered in 2017, it required a huge effort to produce the image released on Wednesday. The operation involved an international team of scientists using supercomputers to process massive amounts of data.

Jessica Dempsey is deputy director of the East Asian Observatory in Hawaii and a co-discoverer in the project. "We've been hunting this for a long time," she said of the new black hole image. "We've been getting closer and closer with better technology," she added.

virtual – adj. something that can be done or seen using computers or the Internet instead of going to a place

shadow – n. a dark area made by something blocking light