Update Required To play the media you will need to either update your browser to a recent version or update your Flash plugin.
By Andrew Smith
03 November 2022


The European Southern Observatory on Monday released an image of colorful clouds of gas created by the explosion of a huge star long ago.

The clouds are in our own Milky Way galaxy about 800 light years from Earth. A light year is the distance light travels in a year, 9.5 trillion kilometers. Scientists estimate that the star was at least eight times the mass of the sun.

The area of the colorful cloud is about 600 times the size of our own solar system. 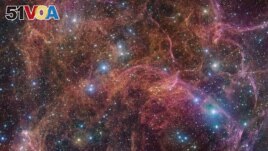 An undated image shows a view of the orange and pink clouds that make up what remains after the explosive death of a massive star - the Vela supernova remnant. (ESO/VPHAS+ team/Cambridge Astronomical Survey Unit/Handout via REUTERS )

The image shows the pink and orange filament structures of the cloud. Filaments are like very thin strings such as silk or the strings of a spider's web.

The cloud was created by the star's explosion, called a supernova.

In a supernova, a large star collapses onto its core or center. The pressure and temperature at the core become so high that atoms of heavier elements are formed, and huge amounts of energy are released in a massive explosion. A supernova can also produce very heavy elements such as iron, gold or uranium.

Bruno Leibundgut is an astronomer connected with the European Southern Observatory (ESO). He explained that denser areas of material from the supernova hit surrounding gas and created some of the filaments seen in the image.

He said, "Most of the material that shines is due to hydrogen atoms that are excited. The beauty of such images is that we can directly see what material was inside a star."

The image shows the cloud, called a nebula, about 11,000 years after the explosion.

What is left of the supernova is a small, very dense spinning object called a pulsar. The pulsar spins about 10 times per second.

The picture of the cloud is a combination of many images taken by the VLT Survey telescope in Chile. The telescope uses a camera with filters to capture light of different colors. The data for the image was collected from 2013 to 2016, the ESO said.

Will Dunham reported this story for Reuters. Andrew Smith adapted it for VOA Learning English.

filament –n. a material that appears long and very thin like a hair

silk –n. a material that comes from silkworms and is manufactured into cloth

core –n. the central part of something

due to –prep. as a result of

spin –v. to go around

filter –n. a device that admits a substance but not others