Update Required To play the media you will need to either update your browser to a recent version or update your Flash plugin.
By Pete Musto
15 July, 2018

Ball is a researcher with the United States Geological Survey, the agency which studies the country's land and natural resources. She was at "fissure 8," one of at least 22 holes that have opened around the Kilauea volcano in the past two months.

Rock from deep inside the volcano is so hot that it has become a liquid. The liquid, known as lava, began flowing from the openings in early May. At fissure 8, the lava shot up as high as 45 meters in the air before slowly heading for the Pacific Ocean a few kilometers away.

"The volcano is doing what it wants to," Ball told the Reuters news service. "We're reminded what it's like to deal with the force of nature."

Scientists have been in the area of the volcanic activity measuring the eruptions 24 hours a day, seven days a week since Kilauea first exploded. They are a mix of U.S. Geological Survey experts, University of Hawaii researchers and trained volunteers. They work six-to-eight-hour periods in teams of two to five.

The intense heat will melt any non-natural clothing materials, so the team members can only wear heavy cotton. Gloves protect their hands from sharp volcanic rock and glass. Head coverings protect against falling lava stones, and breathing devices protect against gases, like sulfur, coming from the openings. 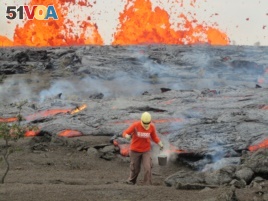 Some geologists have died studying active volcanoes. David Alexander Johnston was a volcano expert with the U.S. Geological Survey. He was killed by the 1980 eruption of Mount St. Helens in Washington state. Harry Glicken was another American expert who worked with French researchers Katia and Maurice Krafft. All three were killed while studying Mount Unzen in Japan.

Jessica Ball completed her studies at the State University of New York at Buffalo, located near the Canadian border. She compares Kilauea's eruptions to Niagara Falls, which is near her former school.

"It gives you the same feeling of power and force," she said.

Kilauea has been erupting almost without stopping since 1983. It is one of the world's most closely observed volcanoes. Most of these observations took place at the Hawaiian Volcano Observatory on Kilauea's highest point, from which researchers have now had to flee. But the latest eruption is one of the biggest and could provide scientists with a lot of new information.

Ball and her fellow researchers are studying how magma - the molten rock beneath the earth - flows through a series of tubes under Kilauea before being sent flying in to the air. Once magma passes through the earth's surface, it is considered lava.

Ball says they want to learn what warning signs may exist for future eruptions to better protect Hawaii's communities.

Janet Snyder is with the local government where Kilauea is located. She notes that steam or ash erupt from the volcano's highest point almost every day. But the latest eruption has destroyed over 1,000 structures and forced 2,000 people to flee the area.

Scientists had thought the steam explosions resulted from lava at the highest point dropping back down through the volcano into groundwater. This was based on Kilauea's 1924 eruption, to which the current one is most often compared.

Michael Poland is the scientist-in-charge at Yellowstone Volcano Observatory. He says the explosions this time have released lots of sulfur dioxide gas. This leads scientists to believe magma is involved.

Hundreds of small earthquakes caused by the eruptions have damaged the structure of the Hawaiian Volcano Observatory. So Poland and other scientists pulled equipment and records out of the building and moved them to the University of Hawaii in Hilo.

The records included scientific information and photos that are more than 100 years old, Poland says.

"These materials are invaluable to someone who says, ‘I have this new idea, and I want to test it using past data,'" noted Poland.

The recent eruption is now Kilauea's second longest eruption on record. The only longer one was in 1955. But Jessica Ball suggests this eruption offers far better chances for research than earlier events.

"We've got much better instruments and we've got longer to collect the data," she said.

Terray Sylvester and Jolyn Rosa first reported this story for the Reuters news service. Pete Musto adapted it for VOA Learning English. Hai Do was the editor. We want to hear from you. What do you think scientists will learn from these recent volcanic eruptions? Write to us in the Comments Section or on 51VOA.COM.

remind(ed) – v. to make someone think about something again

geologist(s) – n. a scientist who studies rocks and layers of soil in order to learn about the history of the Earth and its life

groundwater – n. water that is underground