Update Required To play the media you will need to either update your browser to a recent version or update your Flash plugin.
By Anne Ball
02 July, 2019


Scientists report that the first object from another star system found speeding through our solar system in 2017 was not an alien spaceship.

Astronomers named the cigar-shaped object ‘Oumuamua, but they still do not know exactly what it is. Its strange shape and movements made some scientists wonder whether ‘Oumuamua was some kind of technology from a distant world. They wondered whether alien beings had created the object to explore the universe.

But after studying records from the 2017 sighting, an international team of researchers wrote that "we find no compelling evidence to favor an alien explanation."

Scientists followed Oumuamua from October 14, 2017, until January 2, 2018. They raced to collect as much data as possible as it passed through our solar system. Then it became too difficult to see, even using the most powerful telescopes. 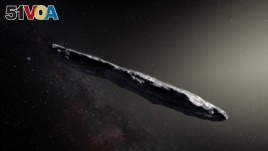 Artist's picture of Oumuamua as it passed through the solar system after its discovery in October 2017. (Image Credit: European Southern Observatory/M. Kornmesser via NASA)

The object has a reddish color and is estimated to be about 800 meters long.

"Our key finding is that ‘Oumuamua's properties are consistent with a natural origin, and an alien explanation is unwarranted," said astronomer Matthew Knight. He works at the University of Maryland and was co-leader of the study. The findings were reported in the journal Nature Astronomy.

"We have never seen anything like 'Oumuamua in our solar system. It's really a mystery still," Knight said. "The alien spacecraft hypothesis is a fun idea," he added, but the study suggests there are many natural explanations for it.

‘Oumuamua was first seen by the Pan-STARRS1 telescope at the University of Hawaii. Its name in the native Hawaiian language means a messenger arriving from a great distance.

Knight said it is not easy to describe Oumuamua as a comet or asteroid. Asteroids are rocky, with no ice, and comets are a mixture of rock and ice, so the scientists decided to use the more general word, "object."

Oumuamua was ejected from a distant star system and is moving through interstellar space and through our solar system. It has a strange spinning movement, much like a bottle laying on the ground, spinning on its side. It moves like a comet, but does not have evidence of gas emissions like a comet.

The researchers wrote that a "straightforward explanation for Oumuamua is that it is a planetesimal." That means a planetary building block - or a piece of one - formed in a faraway star system.

What it is made of remains a mystery, including whether it is just rock, or includes some metal or other particles.

When another telescope begins operating in 2022, Knight said, researchers believe scientists will start seeing more objects like it every year. That telescope is called the Large Synoptic Survey Telescope, or LSST.

As for ‘Oumuamua, it is currently on the other side of the planet Saturn, continuing its trip, flying out of our solar system, to who knows where.

Anne Ball wrote this story for VOA Learning English. Her report was based on information from the Reuters news agency and The University of Maryland. George Grow was the editor.

What do you think of our space visitor, ‘Oumuamua? Let us know what you think of this story. Write to us in the comments section below.

alien – n. from somewhere other than the planet Earth

cigar – n. a roll of tobacco leaves that is longer and thicker than a cigarette and that is smoked

compel – v. to force someone to do something

eject – v. to push something out